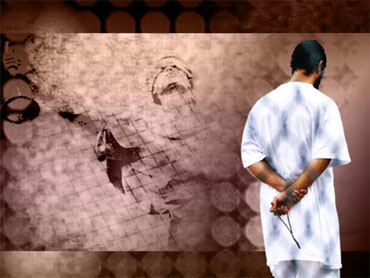 In a decade-long journey, the Tunisian went from drug pusher on the streets of Milan, to Islamic militant trained in Afghanistan to kill Americans, to potential key witness against Guantanamo Bay detainees.

Prosecutors say Lazhar Ben Mohamed Tlil may hold the key to prosecuting Guantanamo Bay prisoners in Italy and may be crucial to U.S. prosecutions, too.

But now he's threatening to clam up.

Tlil's Italian court-appointed lawyer says he has already provided important details to a team of U.S. investigators and identified from photos fellow Tunisian trainees in the Afghan camps. While the cases are confidential, authorities say he also has provided important information to the Italians about several detainees at Guantanamo who might be brought to Italy and tried in a criminal court.

Italian prosecutors say the 40-year-old Tunisian is one of only two extremists held in Europe who actually trained in the camps and are therefore able to provide critical court testimony, should the Obama administration put Guantanamo prisoners on trial in civilian courts.

And it now appears that such trials will take place. On Friday, an Obama administration official said Khalid Sheikh Mohammed, the self-proclaimed Sept. 11 mastermind, and four other Guantanamo Bay detainees will be sent to New York to face trial in a civilian federal court.

But Tlil is unhappy with Italy's witness protection program and feeling "abandoned," according to his lawyer. He is threatening to withhold testimony — not only with American authorities but also, potentially, with Italian prosecutors who may one day prosecute Guantanamo prisoners in Italy. Italy is one of the nations that has agreed to accept Guantanamo prisoners as part of President Barack Obama's plans to close the prison.

"If you ask me how important he is as a witness, I would say he's important for me," prosecutor Elio Ramondini recently told The Associated Press in an interview in his office in Milan's Palace of Justice. Without Tlil, the prosecution of the Guantanamo suspects in Italy "is not difficult, it is impossible."

A former U.S. official who was involved in preparing military commissions cases at Guantanamo said Tlil identified detainees who trained with al Qaeda in Afghanistan from photo lineups and had been expected to fly to the U.S. Navy base in Cuba for trial testimony.

"I wouldn't call him a star witness, but he certainly advances the cases of these other detainees," said the former official, who spoke on condition of anonymity because he is not authorized to discuss pending cases. "He can place Tunisians and others at the training camps."

Tlil met this week with another group of U.S. federal prosecutors, but the witness "won't be willing to go to the United States (to testify), if the problems here aren't resolved," said his lawyer, Davide Boschi.

He said the Tunisian is not willing to speak to Americans again until he gets what he says Italy has guaranteed him, namely a new identity with documents, the ability to get a job and visit his parents in Tunisia, and medical coverage.

Both the lawyer and the prosecutor say Tlil has also expressed reluctance to speak to Americans because of U.S. policy in the Arab world and is demanding guarantees that detainees at any proceeding where he might testify will get a fair trial.

None of this has happened yet, his lawyers say, because of a failure in Rome to find a way around bureaucratic hurdles to grant Italian documents to a foreign citizen. The Interior Ministry said it had no immediate comment.

Ramondini said Tlil is exhibiting a typical reaction among people in witness protection programs whereby the witness, though physically provided for, finds himself socially isolated "hiding not in a cave, but among the population."

"This person cannot live long in this situation," Ramondini said.

Tlil fell in with extremists while living in Milan in the 1990s and selling hashish on the streets. According to his own testimony, he began frequenting an Islamic center that the U.S. Treasury at that time labeled as "the main al Qaeda station house in Europe."

Describing his training in Afghanistan in weapons use and bomb-making, the Tunisian said that "the ideological and religious preparation taught that you have to fight the Americans and their allies because they are enemies of God and because the Americans are killing Muslims all over the place (Sudan etc.)," according a section of a transcript obtained by the AP.

"Killing infidels is the duty of all Muslims," he said.

Tlil returned to Europe after blowing off a hand in training after 10 months in Afghanistan. He was arrested in France in 2002 and sentenced to five years in prison but was extradited to Italy in 2006, where he was wanted for procuring military items and sending them to the Arab world — a role he was given after his hand wound made him ineligible to be a jihadist.

But the Americans were also on to him, with the Treasury in 2002 ordering his assets blocked as a suspected terrorist. Considering him a prize witness, Italy persuaded him to join the witness protection program.

The law governing Italy's witness protection program was drafted by the famed slain anti-Mafia prosecutor Giovanni Falconi, who aimed not only to provide protection to Mafia turncoats — but also to instill a sense of insecurity in organized crime clans due to the constant threat that one of its own could go to the authorities.

The most reliable turncoats are those seeking some kind of vengeance, because they are oriented toward a successful prosecution, Ramondini said. But the real bedrock of the Italian witness protection program is that fair treatment of witnesses has given Italian justice authorities credibility with the turncoats.

"Those who go through the program become true citizens of the state," Ramondini said, noting that it is a much more effective tool in fighting terrorism than secret prisons.

Boschi said that he can provide details of life in the camps that the Americans need.

"He could shed light on the life of a terrorist who leaves (the West) and returns, a picture that the United States doesn't have," Boschi said.

On Sept. 29, the lawyer said, Boschi met for five hours with a team of U.S. investigators led by Carter Burwell, an assistant U.S. attorney based in Brooklyn, New York. He said his client was shown about 15 photos and identified six or seven people.

Italy also needs his testimony for an eventual trial of any Guantanamo inmate accepted by Italy as part of Washington's attempt to close down the prison. The government has indicated it would accept three prisoners.