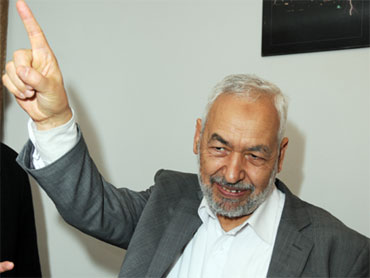 TUNIS, Tunisia - The leader of a long-outlawed Tunisian Islamist party has returned home after two decades in exile, telling The Associated Press in his first interview on arrival that his views are moderate and that his Westward-looking country has nothing to fear.

Rachid Ghanouchi and about 70 other exiled members of Ennahdha, or Renaissance, flew home from Britain two weeks after autocratic President Zine El Abidine Ben Ali was forced from power by violent protests. At the airport on Sunday, thousands of people welcomed him, cheering, shouting "God is great!" and drowning out his attempt to address the crowd with a megaphone.

Ghanouchi rejected any comparison to more radical figures, including the hardline father of the Iranian Revolution.

"Some Western media portray me like (Ayatollah Ruhollah) Khomeini, but that's not me," Rachid Ghanouchi told the AP.

During 23 years in power, Tunisia's ousted president cracked down on opponents, including proponents of political Islam, jailing them and sending many into exile. As Tunisians protests over corruption and repression, Ben Ali fled to Saudi Arabia on Jan. 14.

With Ben Ali gone, Ennahdha has moved quickly to carve out a place in the political scene, taking part in demonstrations and meeting with the prime minister.

Some Tunisians fear that a revival of Islam could hurt their hard-won gains and quality of life, or inspire an extremist movement like the al Qaeda-linked network that has waged an insurgency in neighboring Algeria.

But, while Ennahdha was branded an Islamic terrorist group by Ben Ali, it is considered moderate by scholars. Experts say Ben Ali used a fear of Islamists to seduce Western allies keen for a bulwark against terrorism in a volatile region, and win their blessing despite widespread repression.

Though the ban on Ghanouchi's party hasn't officially been lifted, the new interim government has been more tolerant of it.

Ghanouchi said he wants his party to help Tunisia carry out democratic reforms, though he is not interested in standing in elections expected in upcoming months.

"I am not going to run for president of Tunisia, nor as a minister nor as a parliamentarian," he said in an interview at his brother's home, where family members celebrated with a festive meal of couscous. Another long-exiled opponent - Moncef Marzouki, a secular leftist and human rights activist - was there to welcome him.

Ghanouchi, 69, left the country as Ben Ali came to power in 1987. In 1991, he was convicted in absentia to life in prison, as were most of the party's leaders. Ben Ali banned the party, accusing it of conspiring to kill him and establish a Muslim fundamentalist state. Ennahdha denied those accusations.

The new activism by Islamists - who want a role for Islam in their country's politics - is feeding jitters that extremism may be on the rise in Tunisia, long a nation proud of its modern identity: Women enjoy widespread freedoms, Muslim headscarves are banned in public buildings and abortions, a deep taboo in most Muslim societies, are legal.

Ghanouchi said he seeks to reinforce women's rights set out by Tunisia's Westward-looking modern-day founder, Habib Bourguiba. In 1956, Tunisia abolished polygamy and gave women the right to divorce their husbands. Ghanouchi said his party still supports that historic turning point, along with freedom of religion.

"So why are (certain) women afraid of me?" Ghanouchi said. In a reference to Muslim headscarves, he also asked: "Why don't 'liberated' women defend the right of other women to wear what they want?"

Asked about his view on abortion, he dodged the question, saying the issue was complicated.

Ghanouchi compared his politics to those of Turkish Prime Minister Recep Tayyip Erdogan. Despite Erdogan's Islamist roots, he has been widely viewed as a pragmatist largely loyal to the legacy of Turkey's founding father Mustafa Kemal Ataturk, who sought to create a secular, modern state.

"Why do people want to compare me to (Osama) Bin Laden or Khomeini, when I am closer to Erdogan?" Ghanouchi said.

The unrest that toppled Ben Ali in Tunisia has spread to Egypt, where protesters are calling for the departure of President Hosni Mubarak.

In Tunisia, meanwhile, the interim government has been trying to stabilize the country after weeks of unrest - fueled by widespread corruption and repression - that led to Ben Ali's flight.

Tunisia has issued an international arrest warrant for Ben Ali, accusing him of taking money out of the country illegally.

Swiss prosecutors said Sunday they have launched a money laundering investigation into accounts belonging to Ben Ali and his family. The Federal Prosecutors Office said the accounts blocked two weeks ago contain tens of millions of Swiss francs. Prosecutors in Paris are also probing the family's assets in France.