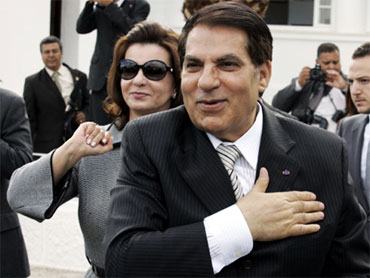 TUNIS, Tunisia - Tunisia's former ruler and his wife were convicted in absentia on embezzlement and other charges on Monday after $27 million (euro18.97 million) in jewels and public funds were found in one of his palaces.

They were sentenced to 35 years each in prison, and fined.

The conviction of Zine El Abidine Ben Ali and Leila Trabelsi followed a day-long trial before the Tunis criminal court. The couple went into exile on Jan. 14 in Saudi Arabia after a month-long uprising that sparked a string of other uprisings in the Arab world.

The ex-president was fined 50 million dinars (about $35,750) and his wife 41 million dinars for embezzlement of public funds and misappropriation. The trove of jewels, some which the court said had "historic value," and the money were found in a palace in the picturesque town of Sidi Bou Said, outside Tunis, following Ben Ali's departure.

Ben Ali, 74, vigorously denied the charges in a statement through his French lawyer, calling the proceedings a "shameful masquerade of the justice of the victorious."

Saudi Arabia did not respond to an extradition request, and some Tunisians expressed frustration that he would not be present for his judgment.

Extra: Tunisia and Facebook
Extra: News of the ouster
Complete Coverage: Anger in the Arab World

The verdict in a second case stemming from the discovery of weapons and drugs in the official presidential palace in Carthage was postponed. Public defenders assigned to Ben Ali said they needed time to study the file. The trial was to continue June 30.