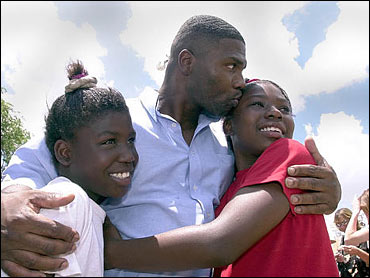 It's a tiny West Texas town that prides itself as "a city with a future." But on Monday, Tulia, Texas was healing the wounds of its past, reports CBS News Correspondent Lee Cowan.

Twelve of its residents, locked up on drug charges for nearly four years on the now-discredited testimony of a single undercover agent, were freed on bail, pending appeals.

A special prosecutor has said he will dismiss the cases if an appeals court orders new trials.

The undercover agent, Tom Coleman, who worked for a regional drug task force, has been indicted on perjury charges.

In a racially-charged case that drew national attention and led to investigations by the U.S. Department of Justice, 46 people — 39 of them black — were arrested and accused of possessing cocaine following an 18-month undercover operation in 1998-99.

Coleman claimed he bought drugs from the defendants, but he worked alone and used no audio or video surveillance. No drugs or money were found during the arrests.

Thirty-eight defendants were convicted on Coleman's uncorroborated word or accepted plea bargains for fear they would get long prison sentences. Twelve of those — 11 black and one white — were released Monday. Another two will remain in custody, one because there is a hold on him from another county and the other because he was ineligible for bail as his case is pending on direct appeal.

The charges had been dismissed in seven other cases, while one defendant died before his trial. The rest of the 38 had already been paroled or released on probation.

A bill passed by the Legislature and signed by Gov. Rick Perry two weeks ago cleared the way for the defendants' release while their cases were still on appeal.

"There are a great number of people who have a great deal of time, effort and faith in each of you invested," state Judge Ron Chapman, who was brought out of retirement to preside over a review of the case, said in ordering the 12 released on personal recognizance bonds, meaning they did not have to post any money.

The judge has recommended the appeals court overturn all convictions in the case.

"I lost my family and things, and now I'm down and out, have to rebuild back up," Robinson said.

Timothy Towery was sentenced to 18 years, but isn't looking for revenge.

In late April, Coleman was indicted on three charges of aggravated perjury stemming from his testimony during hearings held by Chapman.

The judge called Coleman, who is no longer in law enforcement, "the most devious, nonresponsive witness this court has witnessed in 25 years on the bench in Texas."

Coleman's "blatant perjury" during the Tulia prosecutions "so undermines the court's confidence in the validity of the convictions entered in those cases that it would be a travesty of justice to permit the applicants' convictions to stand," Chapman told the appeals court.