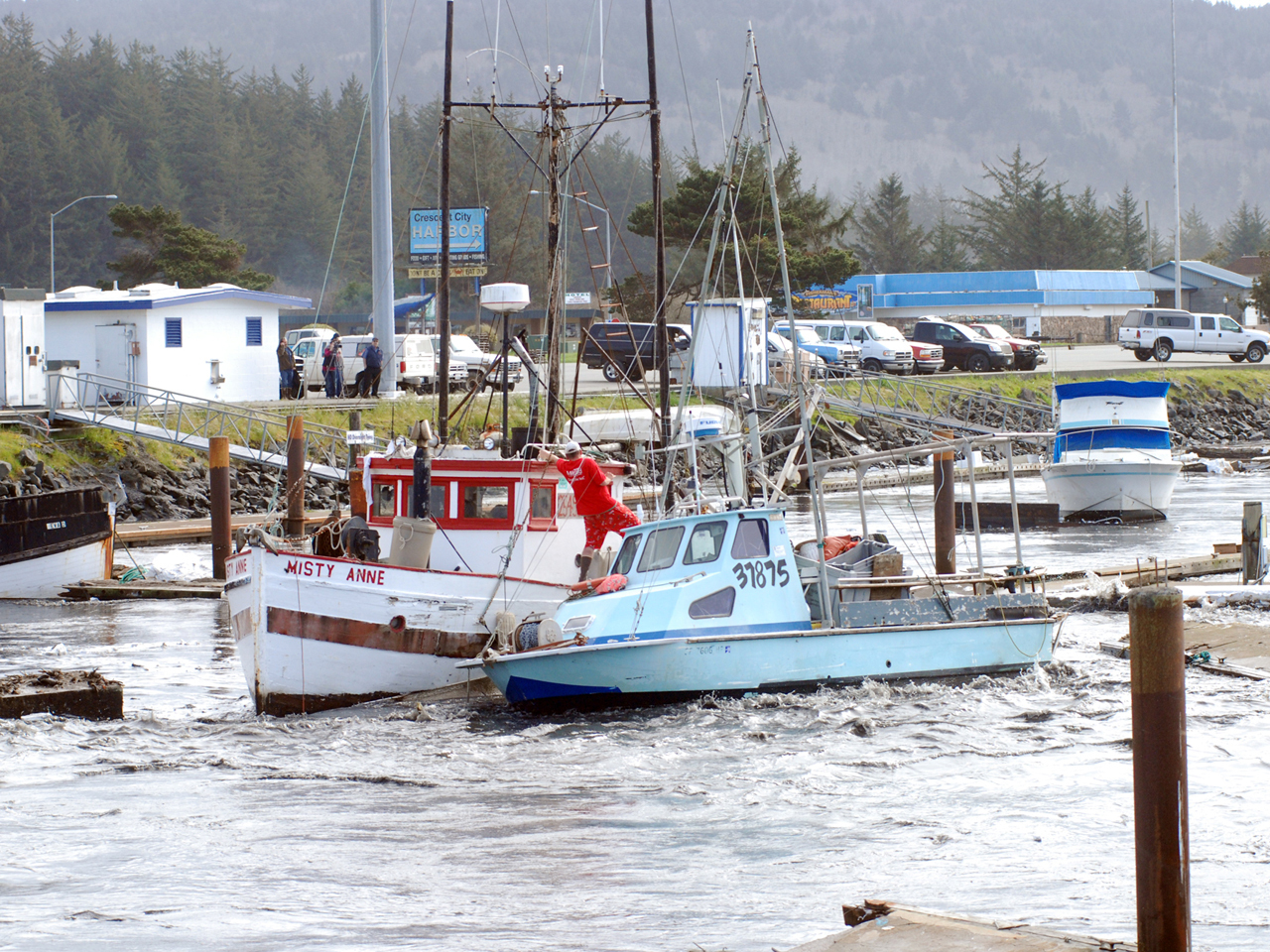 CRESCENT CITY, Calif. - A tsunami swept at least five people watching the waves out to sea Friday and ripped docks out of harbors in California, spreading the destruction of a devastating Japanese earthquake to the shores of the United States.

Four people were rescued from the water in Oregon, but one man who was taking photos in Northern California was still missing Friday afternoon. Coast Guard helicopters searched for him near the mouth of the Klamath River in Del Norte County, Calif., after his two friends made it back to shore.

About 25 miles north, four people were swept off a beach north of Brookings, Ore. Two got out of the water on their own and the others were rescued by law enforcement and fire officials.

A man was found dead aboard a commercial vessel in Brookings, but sheriff's officials said it appeared to be from natural causes.

Submit your photos and video to CBSNews.com

The large waves shook loose boats in that weren't moved in time and tore apart wooden docks in at least two California harbors.

"This is just devastating. I never thought I'd see this again," said Ted Scott, a retired mill worker who lived in Crescent City when a 1964 tsunami killed 17 people on the West Coast, including 11 in his town. "I watched the docks bust apart. It buckled like a graham cracker."

The waves didn't make it over a 20-foot break wall protecting the rest of the city, and no home damage was immediately reported.

The tide began rising shortly after 7:30 a.m. along beaches in Crescent City, a fishing town of about 7,000 near the Oregon border. The highest wave was measured at 8.1 feet, reports CBS Affiliate KTVL.

"There has been major damage to our harbor," Crescent City Councilman Richard Enea told CBS News. "At least 35 boats by count so far have been damaged or destroyed by the surges and the tsunamis. Our docks have been destroyed."

Damage estimates in Crescent City were in the millions, and more boats and docks were hit in Santa Cruz on California's central coast. Surges are expected throughout the afternoon.

President Barack Obama said the Federal Emergency Management Agency is ready to come to the aid of any U.S. states or territories who need help.

Enea said the water receding from the harbor leaves boats stuck on the mud at the bottom of the harbor, and then when the surging tsunami waters racing back in, the boats are just dislodged from their mornings and overturned - "tossed about" and smashing into one another.

Officials are telling residents that the waves may not peak until an hour or two after the tsunami's initial arrival.

By mid-morning, waves were crashing against the 30-foot bluffs, as residents gathered on the overlooks to witness the spectacle. At the harbor, officials scrambled to secure fishing boats as surging water knocked some loose from their docks.

On March 28, 1964, a tsunami produced by the 9.2-magnitude earthquake that struck in Prince William Sound, Ala., caused a series of waves to slash across the shores of Washington, Oregon and California, killing 128 people. Eleven people died in Crescent City - the only tsunami-related deaths on the continental U.S.

The topography of Crescent City's coastline in effect channeled the force of a tsunami inland.

The city's commercial district was flattened, and fuel tanks burned.