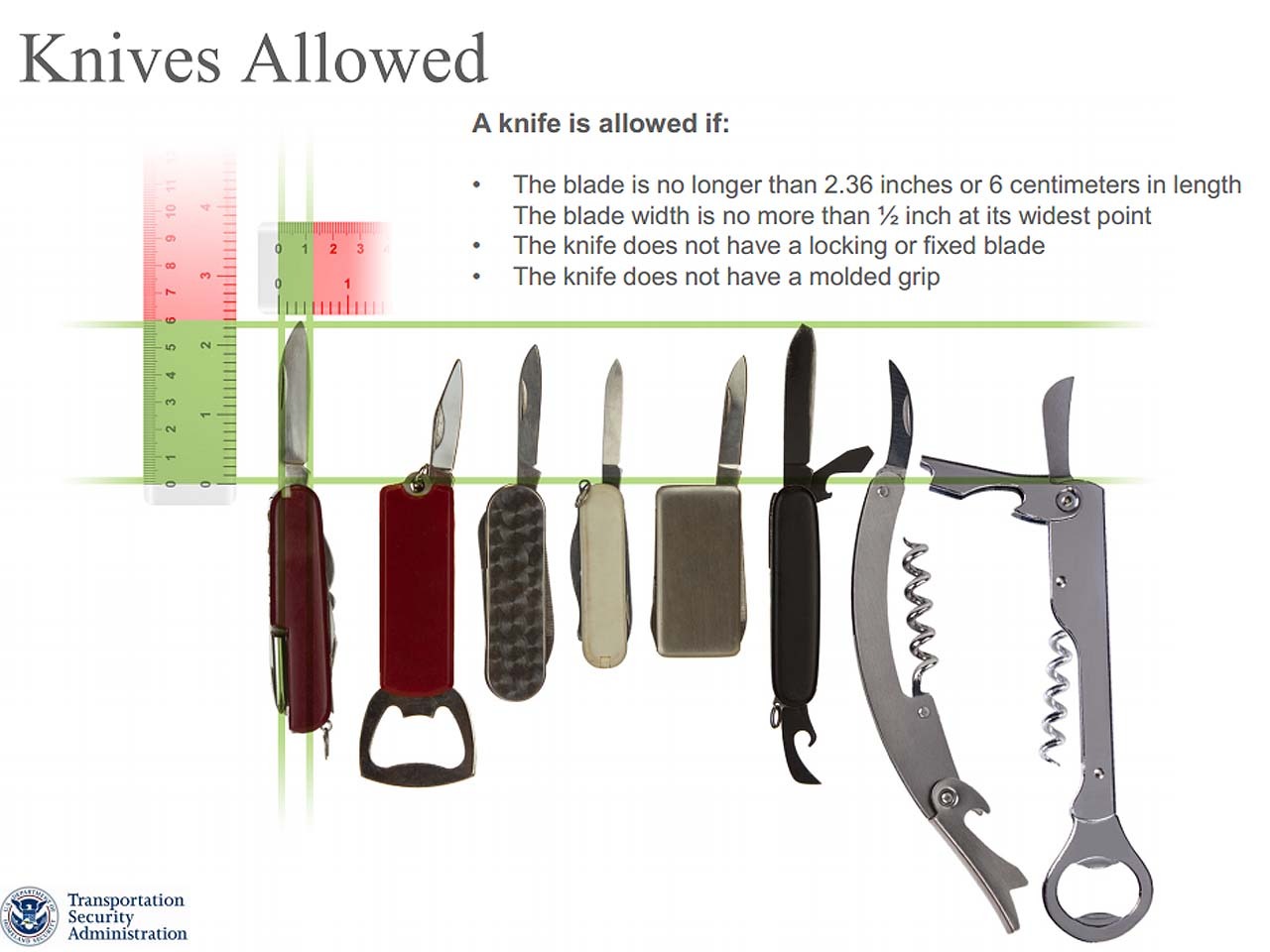 WASHINGTON The Transportation Security Administration is abandoning a plan to allow passengers to carry small knives, souvenir bats, golf clubs and other sports equipment onto planes in the face of fierce congressional and industry opposition, the head of the agency said Wednesday.

By scuttling the plan to drop the knives and sports equipment from TSA's list of prohibited items, the agency can focus its attention on other priorities, including expanding its Pre-Check program to identify ahead of time travelers who don't pose a security risk, TSA Administrator John Pistole told The Associated Press.

Pistole had unveiled the proposal to loosen the rules for carry-ons in March, saying the knives and other items can't enable terrorists to cause a plane to crash. He said intercepting them takes time that would be better used searching for explosives and other more serious threats.

TSA screeners confiscate over 2,000 of the small folding knives a day from passengers.

Skeptical lawmakers, airlines, labor unions and some law enforcement groups complained that the knives and other items in the hands of the wrong passengers could be used to injure or even kill passengers and crew.

Last month 145 House members signed a letter to Pistole asking him to keep in place the current policy prohibiting passengers from including the knives and other items in their carry-on bags.

Flight attendant unions organized protests in Washington and at airports across the country. And Airlines for America, which represents major U.S. airlines, as well as top executives from some of the nation's largest airlines, came out against the plan.

"After getting the input from all these different constituents, I realized there was not across-the-board support that would serve us well in moving forward," Pistole said.

By dispensing with the controversial proposal, he said the agency can focus on programs to identify the greatest security threats.

"It is a recognition that, yes, these items could be used as weapons, but I want our folks to focus on those things that, again, are the most concern given the current intelligence," he said.

Pistole's announcement that he was dropping the plan came as the House was expected to vote on an amendment to a Homeland Security spending bill that would block the TSA from spending money to implement the plan.

The amendment will still be offered and it is expected to pass, said Eben Burnham-Snyder, a spokesman for Rep. Ed Markey, D-Mass., a sponsor of the amendment.

Pistole's decision is a "victory for every single person who sets foot on a plane, and a reaffirmation that the government listens to the people," Markey said in a statement.

But some opponents changed their position in recent weeks as Pistole explained his reasoning to Congress and in meetings with interest groups.

Among those who initially criticized the TSA plan was Debra Burlingame, whose brother Charles was the pilot of the plane that hit the Pentagon in the Sept. 11, 2001, terrorist attacks.

"They laid out a case for this that I thought made a lot of sense, and I really changed my mind," she said in an interview.

"The TSA is so overwhelmed with the screening process and what they are trying to keep off airplanes, that I think to lessen that difficult task or mitigate it can be a good thing," Burlingame said. "There is a safety issue. But there is a difference between safety onboard an aircraft and security aboard an aircraft."

The proposal would have permitted folding knives with blades that are 2.36 inches (6 centimeters) or less in length and are less than 1/2 inch (1 centimeter) wide.

The aim was to allow passengers to carry pen knives, corkscrews with small blades and other knives.

It's unlikely in these days of hardened cockpit doors, armed off-duty pilots traveling on planes and other preventive measures that the small folding knives could be used by terrorists to take over a plane, Pistole told Congress at a March hearing.

But in late April, three days before the proposal was scheduled to go into effect, the TSA announced it was being temporarily delayed in order to accommodate feedback from an advisory committee made up of aviation industry, consumer and law enforcement officials.

The proposal would have brought U.S. security rules more in line with international rules.

There has been a gradual easing by the U.S. of some of the security measures applied to passengers after 9/11.

In 2005, the TSA changed its policies to allow passengers to carry on small scissors, knitting needles, tweezers, nail clippers and up to four books of matches.

The move came as the agency turned its focus toward keeping explosives off planes, because intelligence officials believed that was the greatest threat to commercial aviation.

And in September 2011, the TSA no longer required children 12 years old and under to remove their shoes at airport checkpoints.

The agency recently issued new guidelines for travelers 75 and older so they can avoid removing shoes and light jackets when they go through airport security checkpoints.

In a statement, the TSA said it "will continue to enforce the current prohibited items list. TSA's top priority continues to be expansion of efforts to implement a layered, Risk-Based Security approach to passenger screening while maximizing resources. Risk-Based Security enhances the travel experience while allowing TSA to continue to keep passengers safe by focusing on those we know less about, and we will continue to take steps to improve our ever evolving security posture while also improving the experience of the traveling public."