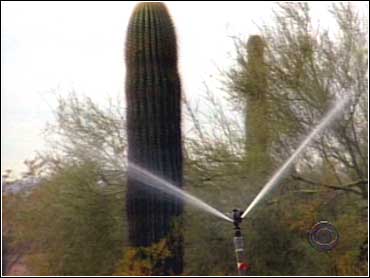 La Nina has put the Arizona desert in such a deep drought that even the cacti need watering. CBS News Correspondent John Blackstone reports from Arizona.

At the Desert Botanical Garden, Horticulturist Patrick Quirk says even the toughest plants are showing the strain.

Quirk explains that a cactus needs "less water than a petunia - but not none at all."

There's trouble in Arizona's mountains, too. With no snow, the forests are dangerously dry. Firefighters expect to be here in June, not February.

"I usually come up here and put my cross country skis on and not have to deal with fire at this time of year," said Allen Farnsworth, of the U.S. Forest Service.

In the city of Williams, Arizona, the lack of rain and snow has led to a desperate search for drinking water.

The city is running on empty, says Mayor Jim Hoffman.

Dogtown Reservoir, the town's main water source, looks like a meadow. With no forecast of help from above, Williams is looking for salvation below.

But he's not counting on it.

This parched earth is bad enough in the desert but up in the mountains it's disastrous. The Arizona Snowbowl, a ski resort, should be deep in snow and busy with skiers right now.

Instead, Manager J. R. Murray says the mountain has been robbed of its usual 260 inches of snow by a villain far out in the Pacific.

"La Nina, La-no-no, whatever you want to call it--it's not working for us right now," says Murray.

But to tourists at the Grand Canyon, where there's no snow and unseasonably mild temperatures, La Nina seems like a blessing.

"It's supposed to be winter and here it's like spring," a tourist gloated.

Pleasant perhaps, but La Nina has put the rest of Arizona on edge.