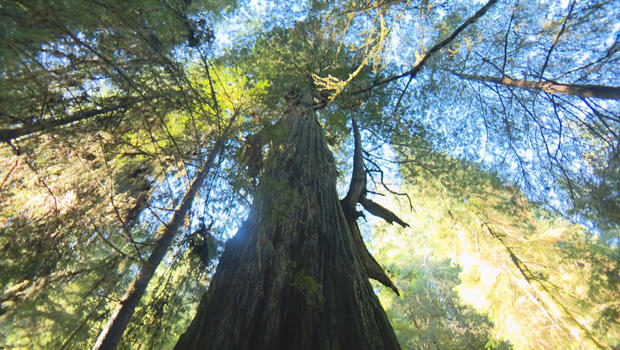 Entering the redwood forest is like stepping back in time. Among all the towering trees, the exact location of the tallest, named "the Grove of Titans," has long been kept secret -- to help preserve them.

"The early management philosophy was, 'We're not gonna tell people,'" said Brett Silver, acting superintendent of Redwood National and State Parks, home to some of the largest trees in the world. "And we're still not telling people, but for a long time, that worked."

Silver agreed to lead Blackstone to the "Titans," on an unofficial state park trail. "This is one of the trails that visitors have created by searching for the trees in the Grove of Titans," Silver said.

A few years ago, someone posted the GPS coordinates of the "Titans" on social media. Images online lured thousands of tourists to the area in search of the secret grove. They criss-crossed the park, creating unofficial trails (known as "social trails").

Calling it the "Grove of Titans" or the "Secret Grove" just enhanced the hunt. "Yeah, it piqued people's interest," Silver said. "People got intrigued – like, the big tree hunt, almost like trophy hunters."

And like trophy hunters, people posed for pictures with the "Titans," sharing them online as proof of their conquest.

Forest ecologist Lathrop Leonard pointed out the damage to trees caused by the visitors' foot traffic. Along with destroying native plants, the soil compaction caused by standing next to a redwood harms the roots.

"You can see the kind of steps leading higher and higher so they can get that perfect picture," Leonard said.

"The tree is so tall, so enormous, [it's] hard to believe that a few people hanging around down here is going to do it harm," said Blackstone.

"Most of the roots of a redwood tree are in the first three feet or so," said Leonard. "Everything they need is up right near the surface. And it kills the small roots where nutrients were taken up into the tree to help the tree grow."

Damage is also caused by people stepping directly onto the tree. Broken bark leaves the redwoods vulnerable to insects and disease. And while some live 2,000 years, more than 95 percent of all of California's redwoods have been lost.

The logging industry followed the gold rush into California, decimating the redwoods. Now the Redwood Parks Conservancy is raising money to protect the Titans.

"You walk into an old growth grove, it really is just a humbling experience," said Joanna Di Tommaso, development director of the Redwood Park Conservancy. "It puts everything in perspective. It puts life in perspective."

About $1.4 million is needed to build raised walkways that would allow for selfies without endangering the health of the trees. The Park Service says it's likely a three-year project. In the meantime, people are being asked to stay on official trails. "I know it's kind of a reach," Silver said. He added, "That's our only defense right now."

By staying on the trails, visitors can still see the forest and save the trees.