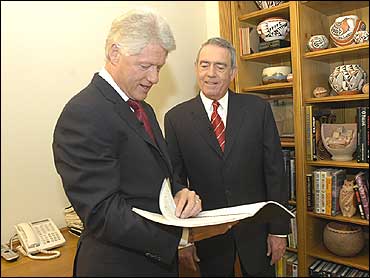 In her book, Sen. Hillary Clinton describes the moment when her husband finally told her the truth about White House intern Monica Lewinsky.

She wrote that upon hearing the news, she could hardly breathe, was gulping for air and started crying and yelling at him asking, "Why did you lie to me?"

60 Minutes asked former President Bill Clinton to tell us about that moment, which he describes as his worst personal day at the White House.

In his book, Mr. Clinton writes about how furious Hillary was when she found out the truth.

"I had a sleepless night and woke her up and sat down on the side of the bed and just told her. And it was awful. But I had to do it," recalls Mr. Clinton.

"Because the grand jury testimony was coming up, and I was gonna tell the truth to the grand jury, and I wanted her to know before it happened. I had to tell her."

What did she say and what did she do? "I don't want to go into the details," says Mr. Clinton. "She was angry and she was mad, and she was as mad about me not telling her before. I think is – almost as mad, but that I hadn't told her about it as what I'd done."

In his book, Mr. Clinton writes about how furious Hillary was: "I woke her up in the White House early one morning. She looked at me as if I had punched her in the gut."

"Well, you know, we'd been together a long time. We started going together in 1971. And we were each other's best friends. We'd been through everything together. We knew just about everything there was to know about each other," says Mr. Clinton.

"And when you go through the kind of struggles we have, it's almost becomes inexplicable that anything would be so bad you wouldn't tell her."

Not only had Hillary Clinton believed the lie the president told the country, she had also gone out on a limb to defend her husband in public. What was Mr. Clinton thinking at that time?

"I was thinking, first of all, I felt sick that she was having to defend me one more time. And I felt terrible. So I was worried sick that Hillary was defending me. I also believe that she told the truth. Both things were true. I did a bad thing. I made a terrible, moral error," says Mr. Clinton.

"That's true. It's also true there was a vast right wing operation. I told Hillary the only thing that I kind of hated was that she used the word 'conspiracy' because most of it was right out in the open."

Two days after Mr. Clinton told Hillary the truth, he gave his videotaped testimony to Kenneth Starr's grand jury. The tape, which was released to the news media, showed the normally confident Clinton at his worst, humiliated and embarrassed: "When I was alone with Miss Lewinsky on certain occasions in early 1996 and once in early 1997, I engaged in conduct that was wrong."

His testimony was tortured. And he used careful, legalistic language to avoid perjuring himself.

The former president writes in his book he was seething at Starr's efforts to turn the videotaped testimony into a "pornographic home movie." But he also knew that Starr's videotape might cost him his presidency and be the final straw in his relationship with Hillary.

She and Chelsea barely talked to him, and he writes that he spent months sleeping on the couch: "I was afraid that I would lose not only my marriage but my daughter's love and respect as well."

"I was worried about that. You know, my daughter is a remarkable person. But she's, you know, she has her own opinions. She has strong convictions," says Mr. Clinton. "And children also, you know, as I said in the book sooner or later every child learns that his or her parents are not perfect. But this was way beyond that and it was a big dose to swallow."

Mr. Clinton says Hillary needed time with him to decide if she would stay in the relationship.

"The first thing we had to do is just get through the days, a few days. We had to let some time pass and Hillary had to decide whether she wanted to stay married to me. And then when she decided she was willing to try, that's when we agreed that we would work together -- we'd take a day a week," recalls the former president.

"And we did. A whole day a week every week for a year. Maybe a little more. And did counseling. And we did it together. We did it individually. We did family work. It was hard and interesting and I would say to people who have invested a lot of time in a relationship that before they give up on it it's worth trying."

Mr. Clinton said he met regularly with three ministers to help him hold his family together, and during 60 Minutes' visit to Arkansas, he told us he has believed in the power of prayer since he was a child, when he went to services at the old Baptist church in Hot Springs.

"[I prayed] a lot as president. When we had a daughter, we prayed every night together. And I prayed a lot alone. All my life," says Mr. Clinton. "I didn't wait for the bad times."

But when times did get bad, Mr. Clinton says he's always been helped by the old friends he sees whenever he goes home. He says he's had his "FOBs," or "Friends of Bill" since old school days: "I've always stayed in touch with my friends. And I've known them all since I was 10 or younger. Nine or younger."

And along with his most loyal friends, there's always been an unusually dedicated band of adversaries.

Does the former president believe that people either love him or hate him? "A lot of people have hated me. I think that's right," he says. "I've always tried to change things. And people who try to be change agents are going to make people mad against the changes you're trying to make. I think secondly, I puzzled a lot of people, and confused them."

President Clinton acknowledges in his book that he got a reputation early on as being cocky and arrogant. He was only 32 when he was first elected governor of Arkansas. Looking back, was he too young to be in office?

In his memoir, Mr. Clinton concedes he was voted out as governor after just one term because he tried to do too much too fast -- a mistake he thinks he repeated in his first 100 days in the White House. But in Arkansas, he ran again and was elected to five more terms as governor.