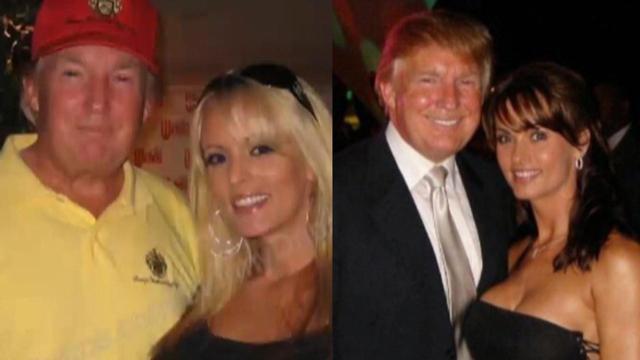 New information ties President Trump to his campaign's efforts to silence women who claim they had sex with him more than a decade ago. CBS News sources confirm the president was in the room when his then-attorney Michael Cohen and National Enquirer publisher David Pecker discussed paying hush money in August of 2015, reports CBS News' Weijia Jiang. Cohen pleaded guilty to breaking campaign finance laws in connection with hush money payments.

In an interview with ABC News, Cohen said the hush money payments to Daniels and McDougal were made to impact the election.

"Nothing at the Trump Organization was ever done unless it was run through Mr. Trump...He directed me to make the payments, he directed me to become involved in these matters," Cohen said. "You have to remember at what point in time that this matter came about, two weeks or so before the election, post the Billy Bush comments. So, yes, he was very concerned about how this would affect the election."

The president is pushing back against the accusations, claiming they are being made to make him look bad—even after Cohen was sentenced to three years in prison in part for the crimes the president denies. Mr. Trump said when it comes to breaking campaign finance laws, the only thing he did wrong was trust a bad attorney.

"Let me tell you, I never directed him to do anything wrong. Whatever he did, he did on his own," Mr. Trump said in an interview on Fox News Thursday. "And you know what? In retrospect, I made a mistake….I hire usually good people."

"People saying that we did this in furtherance of the election. There is just no proof of that. That is somebody's opinion," Conway said on CNN.

Mr. Trump's statements on the matter have evolved from being unaware in April. Now, he says the payments were a "simple private transaction" and that there are ulterior motives to calling them anything more.

Raids of Cohen's properties have also led to a criminal investigation into President Trump's inauguration spending. Federal prosecutors reportedly are looking at whether some of the donors to the president's $107 million inauguration fund gave money in return for access to Mr. Trump.

In a statement, the inauguration committee said "donors were vetted in accordance with the law" and that "no improprieties have been found."

Press Secretary Sarah Sanders said Thursday that the committee "doesn't have anything to do with the president."

Geithner talks to Anthony Mason about his new memoir, and spending billions of taxpayer dollars to save the banks