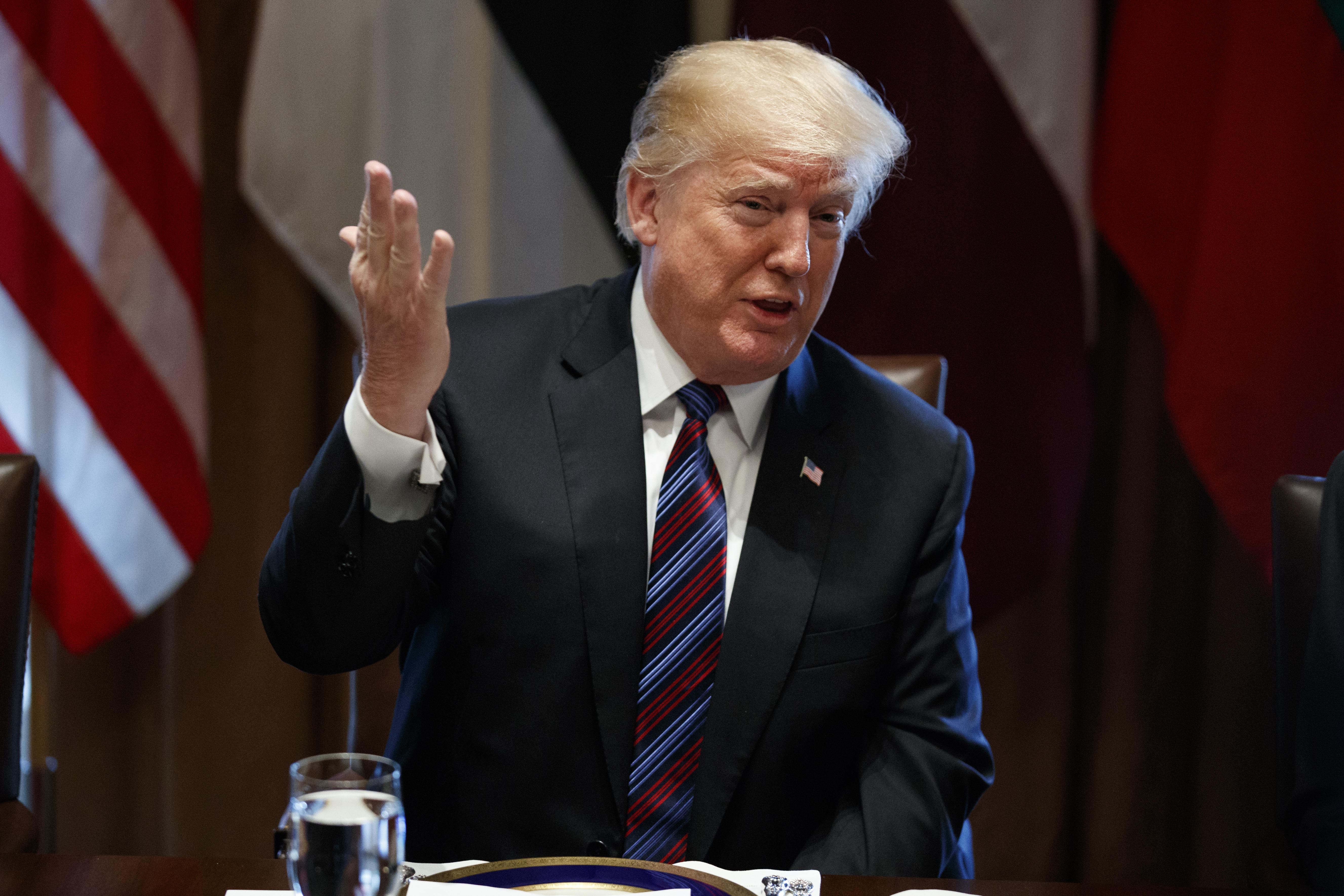 WASHINGTON -- President Trump said Tuesday he wants to use the military to secure the U.S.-Mexico border until his promised border wall is built.

"We are going to be guarding our border with the military," Mr. Trump said, calling the measure a "big step."

Mr. Trump has been deeply frustrated about the lack of progress building what was the signature promise of his campaign: a "big, beautiful wall" along the Mexican border. He's previously suggested using the Pentagon's budget to pay for building the wall, arguing it is a national security priority, despite strict rules that prohibit spending that's not authorized by Congress.

In Tuesday's meeting, Mr. Trump suggested the country needs a wall that spans about 700 or 800 miles of the approximately 1,954 mile U.S.-Mexico border.

"We cannot have people flowing into our country illegally, disappearing, and by the way never showing up for court," the president said.

The Department of Homeland Security, Pentagon and White House did not immediately respond to requests for comment on how such a plan might work.

Mr. Trump's announcement came a day administration officials said they're crafting a new legislative package aimed at closing immigration "loopholes." Mr. Trump has called on Republican lawmakers to immediately pass a border bill using the "Nuclear Option if necessary" to muscle it through.

"The big Caravan of People from Honduras, now coming across Mexico and heading to our "Weak Laws" Border, had better be stopped before it gets there. Cash cow NAFTA is in play, as is foreign aid to Honduras and the countries that allow this to happen. Congress MUST ACT NOW!" Mr. Trump tweeted at daybreak Tuesday. The president also tweeted about "caravans" on Sunday and Monday.

The president has been tweeting about immigration and the border for the last few days, declaring protections for so-called Dreamer immigrants "dead," accusing Democrats of allowing "open borders, drugs and crime" and warning Mexico to halt the passage of "caravans" of immigrants or risk U.S. abandonment of the North American Free Trade Agreement.

Mr. Trump has been seething since realizing the major spending bill he signed last month barely funds the "big, beautiful" border wall he has promised supporters. The $1.3 trillion funding package included $1.6 billion in border wall spending, but much of that money can be used only to repair existing segments, not to build new sections.

Among the new measures the administration is pursuing: ending special safeguards that prevent the immediate deportation of children arrested at the border and traveling alone. Under current law, unaccompanied children from countries that don't border the U.S. are turned over to the Department of Health and Human Services and undergo often lengthy deportation proceedings before an immigration judge instead of being deported.

The administration is also pushing Congress to terminate a 1997 court settlement that requires the government to release children from custody to parents, adult relatives or other caretakers as their court cases proceed. Officials complain that many children never show up at their hearings.

The proposals appear the same as those included on an immigration wish list the White House released in October but failed to gain traction during negotiations over the border wall. Such proposals are likely to face opposition from moderate Republicans and Democrats going into the midterm elections. But Mr. Trump appears intent on ensuring the issues remain at the forefront of public conversation, even though the spending bill was widely seen as the last major legislation likely passed this year.

Mr. Trump's past calls to for the "nuclear option" — changing Senate rules so that a simple majority of 51 votes is needed to advance legislation, instead of the current 60 votes — have been dismissed by Senate Majority Leader Mitch McConnell. McConnell says Republicans will welcome the 60-vote margin if they return to the minority. The current 51-49 Senate split favors Republicans.

Mr. Trump announced last year that he was ending the program that protects young "Dreamer" immigrants, but the Department of Homeland Security is continuing to issue renewals because of a court order.

Notably, his favored solution for extending protections to them mustered only 39 votes in the Senate, meaning it couldn't have passed even if the rules had been changed.

Mr. Trump's tweets calling on Mexico to halt "caravans" followed a "Fox & Friends" report Sunday that featured the leader of the union representing border patrol agents predicting that those in the caravan would create havoc and chaos in the U.S. as they wait for immigration reform.

About 1,100 migrants, many from Honduras, have been marching along roadsides and train tracks in the southern Mexican state of Oaxaca.

These "Stations of the Cross" migrant caravans have been held in southern Mexico for at least the last five years. They began as short processions of migrants, some dressed in biblical garb and carrying crosses, as an Easter-season protest against attacks against Central Americans as they cross Mexico.

Individuals in the caravans often try to reach the U.S. border but usually not as part of the caravan. The caravans typically don't proceed much farther north than the Gulf Coast state of Veracruz. The current march is scheduled to end this month with a conference on migration issues in the central Mexican state of Puebla.