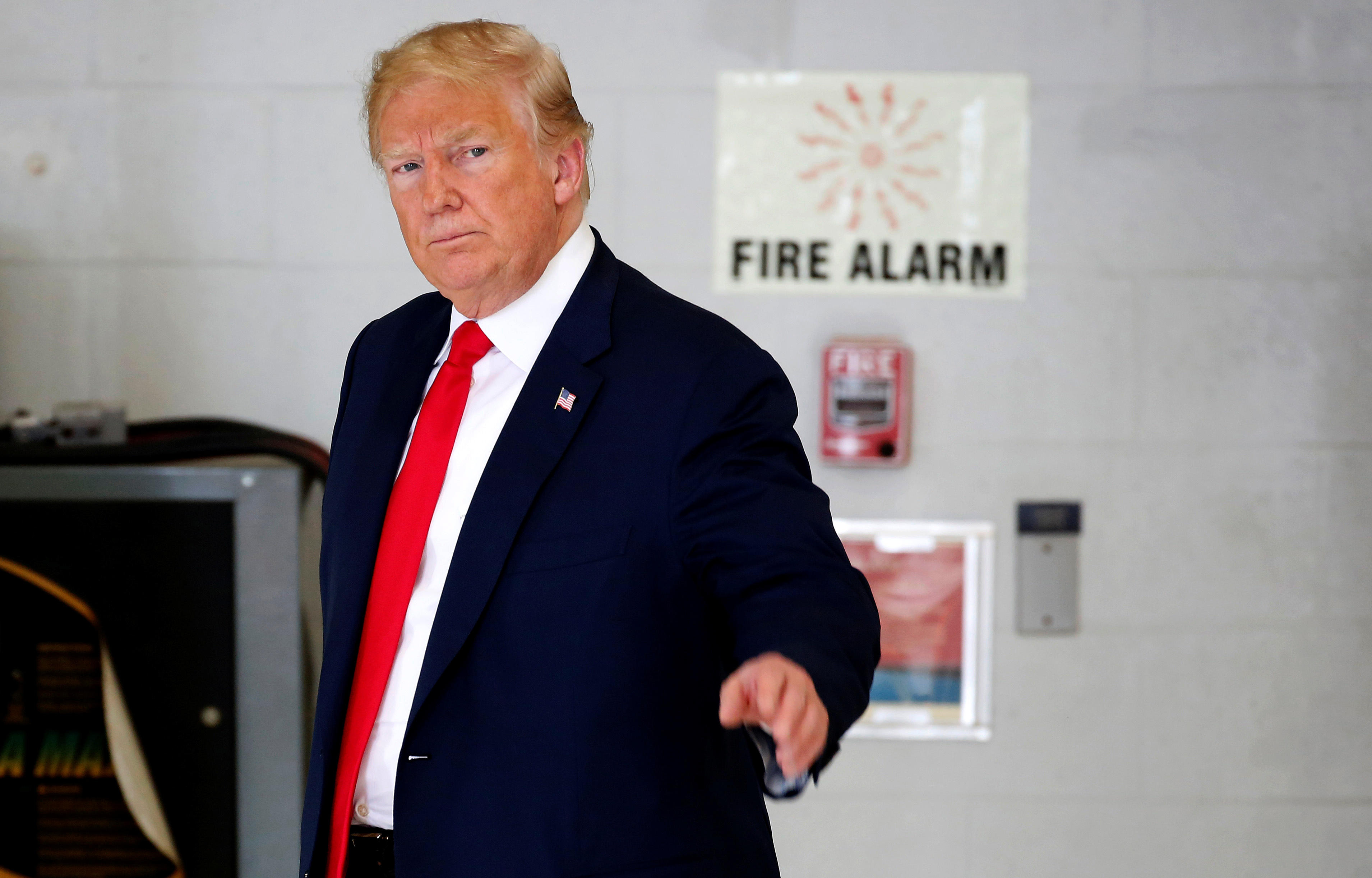 HOUSTON — Seeking to comfort grieving families and shaken survivors, President Donald Trump spent more than an hour privately Thursday with some of those impacted by a Texas mass school shooting that killed 10 and wounded more than a dozen on May 18.

The latest spasm of violence in a year marred by assaults on the nation's schools, the shooting at Santa Fe High School was the latest to test the president's role as national comforter-in-chief. Trump met with more than two dozen people affected by the shooting, and did not publicly share his message for the grieving families and local leaders during a meeting at a Coast Guard base outside Houston.

Pamela Stanich — whose 17-year-old son, Jared Black, was among the eight students killed — was one of the parents who met with Trump, presenting him with a family statement and a copy of her son's eulogy.

Trump "met with us privately and showed sincerity, compassion, and concern on making our schools safer across the nation," she wrote in a Facebook post after the meeting. "He spent time talking to the survivors and asking on what happened and what would have made a difference. Changes are coming for the good. Thank you Mr. Trump."

Rhonda Hart, whose 14-year-old daughter, Kimberly Vaughan, was killed at the school, told The Associated Press that Trump repeatedly used the word 'wacky' to describe the shooter and the trench coat he wore. She said she told Trump, "Maybe if everyone had access to mental health care, we wouldn't be in the situation."

Hart, an Army veteran, said she also suggested employing veterans as sentinels in schools. She said Trump responded, "And arm them?" She replied, "No," but said Trump "kept mentioning" arming classroom teachers. "It was like talking to a toddler," Hart said.

Reporters were not permitted to witness the meeting.

While the president was in Texas, Trump's school safety commission met outside Washington, part of the president's chosen solution to combat the rising tide of bloodshed after his brief flirtation with tougher gun laws after February's mass killing at a high school in Parkland, Florida went nowhere.

"These events are very tragic, whenever they happen. And you know, the president wants to extend his condolences and talk about the issue of school safety," spokesman Raj Shah told Fox News Channel.

Texas Gov. Greg Abbott and Sen. Ted Cruz, both Republicans, greeted Trump after Air Force One landed at a Houston military base. Abbott joined Trump for the short ride in the presidential limousine to a Coast Guard hangar where the meeting took place.

Trump then headed to a fundraiser at a luxury hotel in downtown Houston, the first of his two big-dollar events in Texas on Thursday. A White House official did not immediately respond to requests for details about how much money was to be raised, and who was benefiting, from the fundraising events.

After 17 teachers and students were killed during a February shooting at Marjory Stoneman Douglas High School in Parkland, Trump said he would work to improve school safety, but has not called for new gun control legislation. He created the commission to review ways to make schools safer.

Trump briefly strayed from gun-rights dogma after the Parkland shooting, but quickly backpedaled. Abbott, a Republican and a staunch gun-rights supporter, has called for schools to have more armed personnel and said they should put greater focus on spotting student mental health problems. He's proposed a few small restrictions on guns since the shooting.

Investigators say student Dimitrios Pagourtzis, 17, carried out the attack with a shotgun and pistol that belonged to his father. Classes at Santa Fe High School resumed Tuesday for the first time since the shooting.

As the Parkland students became vocal advocates for gun control, embracing their public positions as few school survivors had before, Trump quickly became a focal point for their anger. In Trump's visit to Florida after the shooting, aides kept him clear of the school, which could have been the site of protests, and he instead met with a few victims at a local hospital and paid tribute to first responders at the nearby sheriff's office.

There has yet to be a similar outcry for restrictions on firearms from the students and survivors in deep-red Texas.

Displaying empathy does not come naturally to Trump, who has been criticized for appearing unfeeling in times of tragedy, including when he sharply criticized a mayor in Puerto Rico in the aftermath of a deadly hurricane and fought with a Gold Star military family.

But Trump has at times displayed a softer side. On Wednesday, he returned a hug from an 8-year-old boy with muscular dystrophy who attended a White House event where he signed legislation to give patients the right to try experimental treatments.

Before Thursday, Trump was most recently in the Lone Star State on May 4 to attend the annual National Rifle Association convention. He pledged in his address that NRA members' Second Amendment rights "will never, ever be under siege as long as I am your president."

He also touted the administration's "aggressive strategy on community safety" and mentioned armed guards, armed teachers, mental health and metal detectors, but did not mention assault rifles like the one used in Florida.