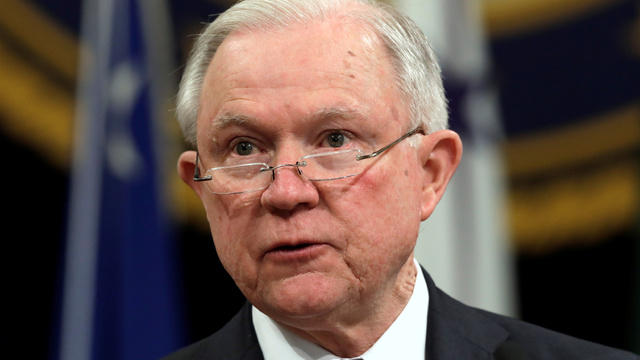 A remark Rep. Trey Gowdy, R-S.C., made on "CBS This Morning" Wednesday prompted a quick response from President Trump. Gowdy suggested that he sympathized with the president's frustration with Attorney General Jeff Sessions, over his recusal from the Russia investigation, and he said he thought that Sessions could have informed the president of his recusal prior to accepting the nomination, so that Mr. Trump then "could have picked somebody else" to be attorney general.

President Trump soon tweeted a response: "I wish I did!"

Gowdy was asked to comment on a  New York Times report that Mr. Trump had "berated" Sessions and had asked him to reverse his recusal from the ongoing probe into Russian interference in the 2016 election. Gowdy argued that the president's request that Sessions reverse his recusal doesn't constitute obstruction of justice.

"I think what the President is doing is expressing frustration that Attorney General Sessions should have shared these reasons for recusal before he took the job, not afterward. If I were the President and I picked someone to be the country's chief law enforcement officer, and they told me later, 'Oh by the way I'm not going to be able to participate in the most important case in the office, I would be frustrated, too, and that's how I read that, is, 'Senator Sessions, why didn't you tell me before I picked you?' There are lots of really good lawyers in the country -- he could have picked someone else," Gowdy told "CBS This Morning."

This isn't the first time Mr. Trump has publicly attacked his attorney general over Sessions' recusal from the probe. Mr. Trump previously told the New York Times in 2017 that he wouldn't have tapped Sessions to serve as attorney general if he had known he would remove himself from the investigation.

"Jeff Sessions takes the job, gets into the job, recuses himself, which, frankly, I think is very unfair to the president," the president said in the 50-minute interview. "How do you take a job and then recuse yourself? If he would have recused himself before the job, I would have said, 'Thanks, Jeff, but I'm not going to take you.' It's extremely unfair -- and that's a mild word -- to the president," Mr. Trump said.

Sessions, however, has stood by his decision, telling Time magazine in March that he thinks he did the "right thing."