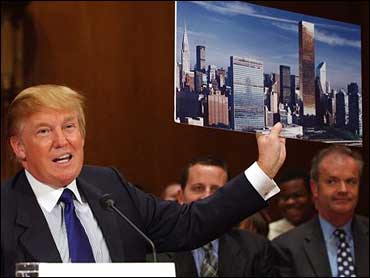 Donald Trump is the only person standing between an honest deal to rebuild the aging U.N. headquarters and a massive waste of public money.

He told senators so on Thursday.

"When can you start?" said one appreciative lawmaker, Sen. Mark Dayton, D-Minn.

The United Nations says it will cost $1.2 billion to overhaul the 39-story building along New York's East River. No, says the city's highest-profile developer. More like $3 billion, he told senators.

This project is no more challenging, he said, when he refurbished the skating rink in Central Park. That was years ago, when New York could not.

"This is a bigger version of the Wollman Skating Rink, that's all it is to me. ... I don't want any money. I want nothing," said the star of NBC's "The Apprentice" and author of "Trump: The Art of the Deal."

Trump's estimate for the work: $600 million to $700 million. He appealed to members of a Senate Homeland Security and Governmental Affairs subcommittee to let him do it. He would manage the project, and waive his fee.

Besides, he knows what it takes to get things built in Manhattan and U.N. types don't, he said.

Congressional leaders have criticized the U.N. renovations plan as overpriced and are concerned that a $1.2 billion loan from the United States may not be in the taxpayers' best interest.

Trump said he could run herd on contractors seeking to inflate prices. "Every one of them, I guarantee you, will find their way to the United Nations," he said.

Sen. Tom Coburn, R-Okla., who led the hearing, criticized the cost of the project and contended the United Nations was reluctant to disclose details.

Christopher Burnham, a former State Department official, is now overseeing the project as the U.N. undersecretary-general for management. He promised to run "a lean, mean operation."

In the aftermath of World War II, a team of 11 architects from around the world came together to build a "Workshop for Peace" -- a home for the newly created United Nations.

The complex, which features Leger murals and a Norman Rockwell mosaic, hasn't had a top-to-bottom renovation since Harrison and then-Secretary-General Trygve Lie laid the U.N. cornerstone on Oct. 24, 1949 -- and it shows.

A half-century later, their architectural gem that has helped define the New York City skyline is in disrepair.

Burnham said there is an urgent need to get started because the headquarters complex is not up to code, is full of asbestos and does not have enough security.