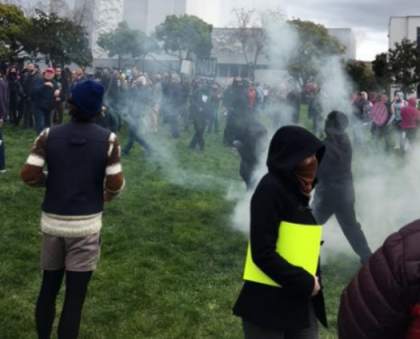 From Colorado’s state Capitol to Trump Tower in New York and the Washington Monument, groups of hundreds of people rallied for President Trump on Saturday, waving “Deplorables for Trump” signs and even carrying a life-size cutout of the president.

The March 4 Trump demonstrations were held around the country, and supporters clashed with generally smaller groups of counter protesters.

In Berkeley, California,  Mr. Trump’s supporters fought counter-protesters during a march in support of the president. People wearing goggles, motorcycle helmets, gas masks or with their face half-covered with bandanas are pushing each other, throwing punches and hitting each other with the sticks holding their signs.

Berkeley police said they  made 10 arrests including five for battery, four for assault with a deadly weapon (including one with possession of a dagger) and one for resisting arrest.

Paramedics have helped at least two men, one bleeding from the head and the other with cuts on his face, CBS San Francisco reports.

Six people protesting the rally in St. Paul, Minnesota, were arrested on felony riot charges after they lit fireworks inside the Minnesota State Capitol and fled, police said. About 400 people attended the St. Paul event, and about 50 showed up to protest it. Some other minor scuffles between the dueling demonstrators were quickly defused.

One man appeared to have been hit in the face, and people on both sides went running as a protester sprayed pepper spray into the crowd, CBS Minnesota reports. The State Patrol says six people were arrested. But the rally was not interrupted.

In Nashville, two people were arrested as protesters clashed with Mr. Trump’s supporters at the Tennessee Capitol. The groups at times cursed at each other and made physical contact, which state troopers broke up, WPLN reported.

Near Mar-a-Lago, the Palm Beach Post reported that people on both sides exchanged profanity. Mr. Trump’s motorcade briefly stopped so he could wave at supporters.

Supporters of Mr. Trump, many clad in red, white and blue, sported signs such as “Christians for Trump” and “This is My Women’s March” outside the State Capitol in Columbus, Ohio. The group began loudly chanting “U-S-A, U-S-A” when a band of anti-Trump protesters arrived around noon Saturday.

The anti-Trump group shouted, “No Trump, No KKK, No Fascist USA,” and waved such signs as, “Not Fit to Serve - No Mandate.”

“We did not want to have something like this happen,” she said, adding, “We came out today because Trump deserves to see he still has people for him. It’s just all sad.”

Outside the State Capitol in Denver, hundreds gathered, listening to speakers including former U.S. Rep. Tom Tancredo on the West Steps facing the mountains. Many in the crowd held American flags or wore red, white and blue and held signs with messages like “Veterans before Refugees.”

Chelsea Thomas, an accountant from Thornton, Colorado, brought her family to the rally - and a life-size cardboard cutout of Mr. Trump. She said the family has taken it with them on camping trips, boat rides and a country music festival.

“It’s nice to be surrounded by people who share your morals and opinions,” said Thomas, as her son walked back and forth across the grass with a flag supporting Mr. Trump. A group of counter protesters gathered nearby, separated from the rally by police tape. They chanted “No Trump. No KKK. No fascist USA” and held signs with messages like “Your vote was a hate crime.”

Hundreds gathered in rallies on both ends of Pennsylvania to show support for Mr. Trump.

“They love their country and they love what Donald Trump represents, which is about making America first,” organizer Jim Worthington said. “... We are here to meet and make sure all Americans are prospering.”

“I couldn’t be more proud of him or proud to be an American,” she said. “And that’s why I am here today.”

Charles Clayton was a Democrat who changed parties to support Mr. Trump. He says the president needs to stay focused policy.

“I thought his speech was great, and I think as far as tweeting, I think he could lay back on that a little,” said Clayton.

In northwestern Pennsylvania, the Erie Times-News reported that about 100 people gathered at a square in downtown Erie for a similar demonstration. “We’ve got to get the whole country united behind this man,” said Richard Brozell, 75, who along with his wife braved the mid-20s temperatures and stiff wind chill to attend

In Augusta Maine, more than 100 people turned out for the event that was supposed to last three hours, but ended early because of freezing temperatures. In Miami, supporters continued a rally while sipping espressos outside a Cuban restaurant, the Miami Herald reported.

At a North Carolina rally, speakers said the dishonest media and left wing politicians were bordering on sedition in their opposition to the Republican president. Some men were seen walking through the Raleigh crowd carrying a flag in support of Mr. Trump as well as a Confederate flag. Gathered just behind the rally was a handful of protesters, some of whom blew air horns in an attempt to disrupt the event.

“We’re gonna take our country back and we’re gonna establish borders and have legal immigration and law and order,” said Cherie Francis, of Cary, North Carolina. “And if you’re against all that, then you should be afraid.”

In Indianapolis, about 30 supporters of Mr. Trump rallied at the Indiana Statehouse in Indianapolis to denounce what they see as unfair treatment of the Republican. A local organizer, 61-year-old Patty Collins, of Indianapolis, said Mr. Trump’s critics “aren’t giving him a chance.”

Mr. Trump’s supporters turned out Saturday in Phoenix. Media outlets reported that several hundred people participated in the Phoenix event held on a lawn at the State Capitol. Some participants wore shirts in support of Mr. Trump. A small group of protesters also were on hand.

In Texas, Austin police say about 300 people have rallied in support of Mr. Trump in a gathering outside the Capitol during rain. One of the organizers, Jennifer Drabbant of Austin, said there have been so many protests against Mr. Trump that she and others wanted to show there are people who support him.

Scores of people have rallied in Virginia Beach, Virginia, in a show of support for Mr. Trump. The Virginian-Pilot reports around 200 of Mr. Trump’s backers showed up Saturday for the event at Mount Trashmore Park. Some held American flags and others wore “Make America Great Again” hats and T-shirts in support of Mr. Trump.

In Lansing, Michigan, about 200 supporters of Mr. Trump rallied on one side of the state Capitol while 100 critics gathered on another side. At one point, the president’s fans shouted “get on the bus” and “go back to Mexico,” The Detroit News reported.

“Agree with President Trump or not, he is our president, and I think what I see happening in D.C. and with the Democrats - it can’t stand,” said Gary Taylor, 60.