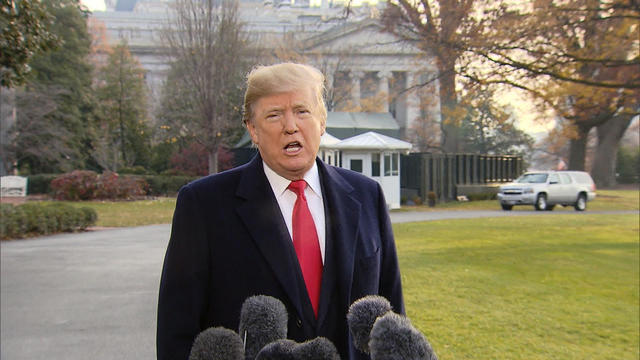 President Trump briefly spoke with reporters as he left Friday morning for the FBI National Academy graduation at the FBI Academy in Quantico, Virginia.

He said GOP candidate Roy Moore should concede in the Alabama Senate race after Democrat Doug Jones clearly defeated him on Tuesday.

The president was asked whether he is considering pardoning his former national security adviser, Michael Flynn, who recently pleaded guilty to lying to the FBI.

"I think we'll be in a position to pass something as early next week," he said, despite the fact that Sen. Marco Rubio, R-Florida, remains opposed to the final agreement unless it further expands the Child Tax Credit, and as Sens. John McCain, R-Arizona, and Thad Cochran, R-Mississippi, deals with health problems.

The president was asked to speak about his phone call with Russian President Vladimir Putin on Thursday.

"It was great, he said very nice things about what I've done with this country in terms of the economy but he also said some negative things in terms of what's going on elsewhere," he said.

The president insisted that there has been "absolutely no collusion" between his campaign and Russia in the 2016 election.