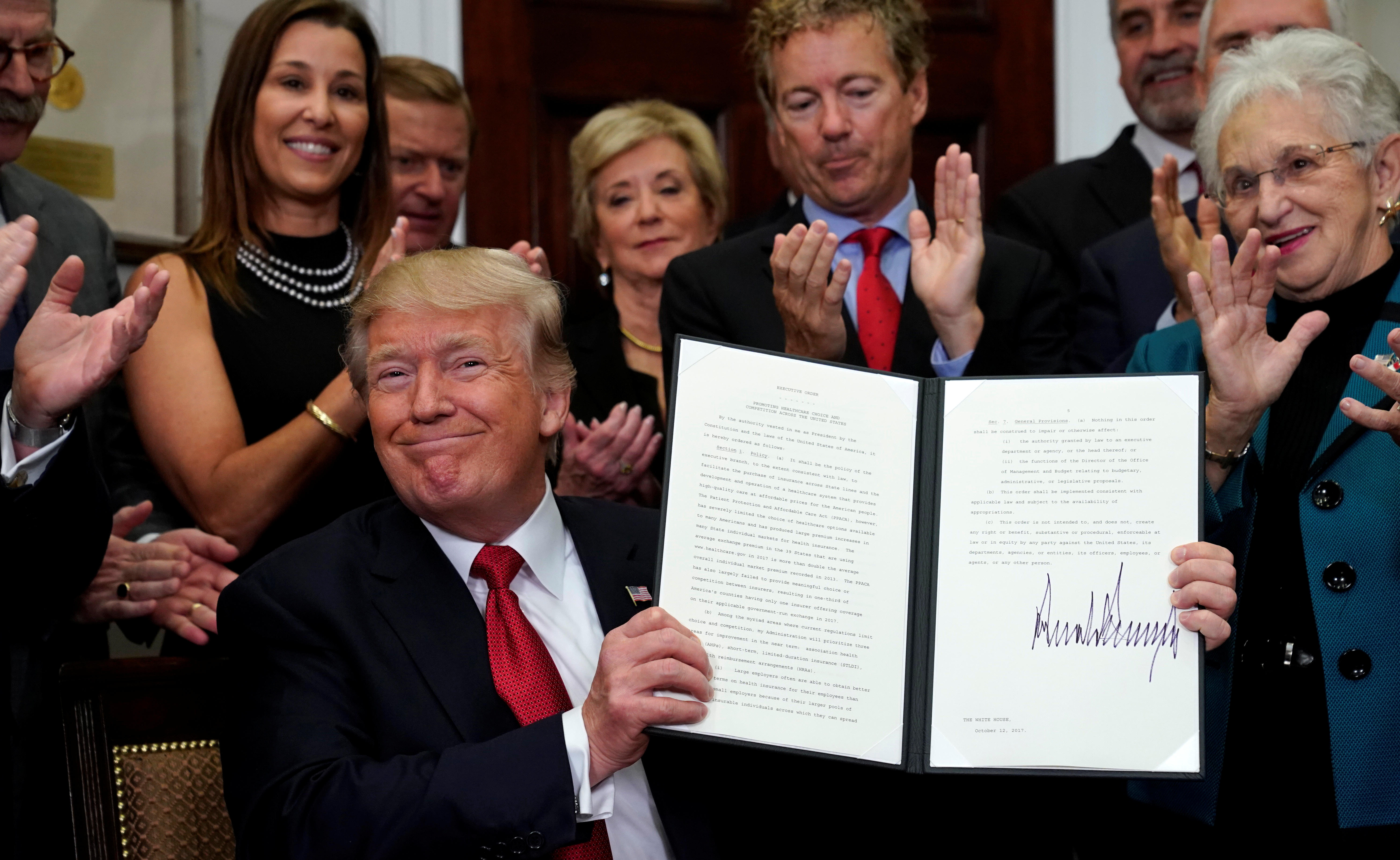 President Trump on Thursday announced he is "starting that process" of repealing and replacing Obamacare with his executive order to unilaterally change some aspects of health insurance coverage.

Mr. Trump, surrounded by top administration officials, business leaders and Sen. Rand Paul, R-Kentucky, in the White House Roosevelt Room, praised his executive order as step towards repealing and replacing his predecessor's signature health care law. Mr. Trump, stuck with a Republican-led Congress that hasn't passed a bill to undo Obamacare, announced earlier this week that he is resorting to his "pen" instead.

Mr. Trump began to walk out of the room without signing the order, until Vice President Mike Pence reminded him.

"We've been hearing about the disaster of Obamacare for so long -- in my case, many years, most of it outside in civilian life," Mr. Trump said. "And for a long period of time since I've started running and since I became president of the United States, I just keep hearing 'repeal and replace, repeal and replace.' Well, we're starting that process, and we're starting it in a very positive manner."

Mr. Trump said the order will cost the federal government "virtually nothing," and will force insurance companies to start "fighting" to sign people up for care.

Mr. Trump didn't back down from his goal of repealing Obamacare and fulfilling a signature campaign promise, despite the GOP-led Congress' inability to agree on how to do that. Mr. Trump said he will "pressure" Congress to repeal and replace Obamacare, "once and for all."

"Well, this is promoting healthcare choice and competition all across the United States," Mr. Trump said. "This is going to be something that millions and millions of people will be signing up for, and they're going to be very happy. This will be great health care."

The president's executive order is intended to make lower-premium plans more widely available. Mr. Trump has long talked about his desire to make health insurance plans available across state lines. His order directs Labor Secretary Alexander Acosta to consider expanding access to association health plans, which could possibly allow American employers to form groups across state lines, according to the White House. The order could also allow employers in the same line of work to join together to offer health care to employees, no matter their state. The president's order, according to the White House, also directs the Labor Department, Treasury Department, and Health and Human Services Department to consider expanding coverage for short-term, limited duration plans that could be made available to people in specific circumstances, like if a person loses his job or misses the open enrollment deadline.

But the president's executive order is likely to face backlash from medical groups, and could very well face a legal challenge.

Former President Barack Obama was criticized heavily by Republicans in 2014 when he said, I've got a pen and I've got a phone," a nod to his intention to use executive action when Congress wouldn't cooperate.

11:45 a.m. Trump begins to walk out of the room without signing the order

After making his remarks, Mr. Trump began walking out of the room, until Vice President Mike Pence tapped him and reminded him to sign the order. Mr. Trump then turned to the table to sign the executive order.

11:45 a.m. Trump pledges to work with Congress to repeal Obamacare "once and for all"

Despite Republicans' inability to repeal Obama's signature law thus far, Mr. Trump isn't giving up, he said. He said he would work with Congress to repeal Obamacare, "once and for all."

Mr. Trump brought up his administration's efforts to cut taxes, saying the "whole country" is looking for such "massive" cuts. The night before, Mr. Trump said his plan will net an average of $4,000 more per average family, although his White House has been unable to explain the math behind those figures.

11:43 a.m. Trump says Obamacare is "destroying everything in its wake"

"The cost of the Obamacare has been so outrageous, it is absolutely destroying everything in its wake," Mr. Trump said.

President Trump didn't expand much on this point, but he said he intends to allow the provision of short-term, limited-duration policies.

11:39 a.m. Trump: This order will cost the U.S. government "virtually nothing"

Mr. Trump touted how he believes his plan will — or rather, won't — have an effect on the federal budget. Mr. Trump said insurance companies will be "fighting" to get everyone signed up.

"You'll get such low prices for such great care," he said.

Mr. Trump said that for years, mostly during his time in the private sector, he heard the need for repealing and replacing Obamacare. Now, the White House is "starting the process," he said.

President Trump said other countries are beginning to respect the U.S.

His comments echoed what he said Wednesday night at a tax plan rally in Pennsylvania.

Paul praised the executive order as something that will help reform the health care system. Paul said he was glad to be a part of this, and sad he appreciated the president's boldness.

President Trump enters the room, to applause, surrounded by top administration officials and members of Congress.