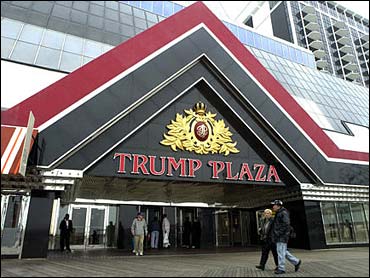 Donald J. Trump's casino empire has filed for bankruptcy protection after months of negotiations with bondholders over restructuring a crushing debt.

Trump Hotels & Casino Resorts Inc. and numerous related operations filed for protection from its creditors under Chapter 11 of the bankruptcy code on Sunday in U.S. Bankruptcy Court in Camden, N.J.

He mastered the art of the deal, built a real estate empire, and cashed in on his fame with a hit TV show, but Trump's casinos are on a losing streak, reports Trish Regan of CBS MarketWatch for The Early Show. The chips may be down but he still sees a silver lining.

"The casino deal here, I think, maybe is going to be the greatest deal of them all," Trump told Regan. "The casinos have always been very good to me."

However, they have never turned a profit for him.

Trump will remain chairman and CEO of Trump Hotels & Casino Resorts, but his share would be reduced to 27 percent, from 47 percent, he said. He would still be the largest single shareholder, he said.

The filings list $1.8 billion in debt, which Trump said would be cut by $500 million. The interest rate on the debt would be reduced to 8 percent, from 15 percent, under the bankruptcy, he said. The company would also be able to draw on a $500 million credit line at 4 percent interest, he said.

Trump denied the bankruptcy was a setback.

"I don't think it's a failure, it's a success," he said. "In this case, it was just something that worked better than other alternatives. It's really just a technical thing, but it came together."

"The writing's been on the wall for the past several years," said Gene Neavin of Federated Investors. "Trump has used too much debt over the years. Now it's coming back to haunt him."

Trump's hotels are increasingly run-down, and visitors are veering to his splashy competitors. He's gambling the refinancing will improve the casinos and draw crowds.

"We have one of the most powerful gaming companies the day it comes out (of bankruptcy). There's no way we could have done that without the 'B' word," Trump said.

He declined to predict how long it will take for the company to emerge from bankruptcy.

He said the restructured company would expand Trump Taj Mahal, his largest Atlantic City casino, and renovate the others.

The Donald, as the mogul is known, has achieved renewed celebrity through the hit reality TV show, "The Apprentice." Each week, Trump eliminates one contestant from a team that fails to make as much money as a competing team.

His signature statement on the show, "You're fired," became a national catch phrase. The new attention also put him back on the best-seller list this spring with "Trump: How to Get Rich."

Trump emerged in the 1980s as one of New York's hottest developers, attaching his name to buildings, the Atlantic City casinos and best-selling books, notably "Trump: The Art of the Deal."

By the early 1990s, though, the headlines were more about financial troubles and his breakup with his first wife, Ivana.

This is the second time that Trump casinos have been through bankruptcy. In 1992, the three casinos he then owned — the Taj Mahal, Castle and Plaza — ended up in Chapter 11, burdened by more than $1 billion in debt and hurt by the 1990-91 recession. Trump later regained control of the casinos.

But he climbed back from the brink of personal bankruptcy and chronicled his return to billionaire status in the 1997 book "Trump: The Art of the Comeback."