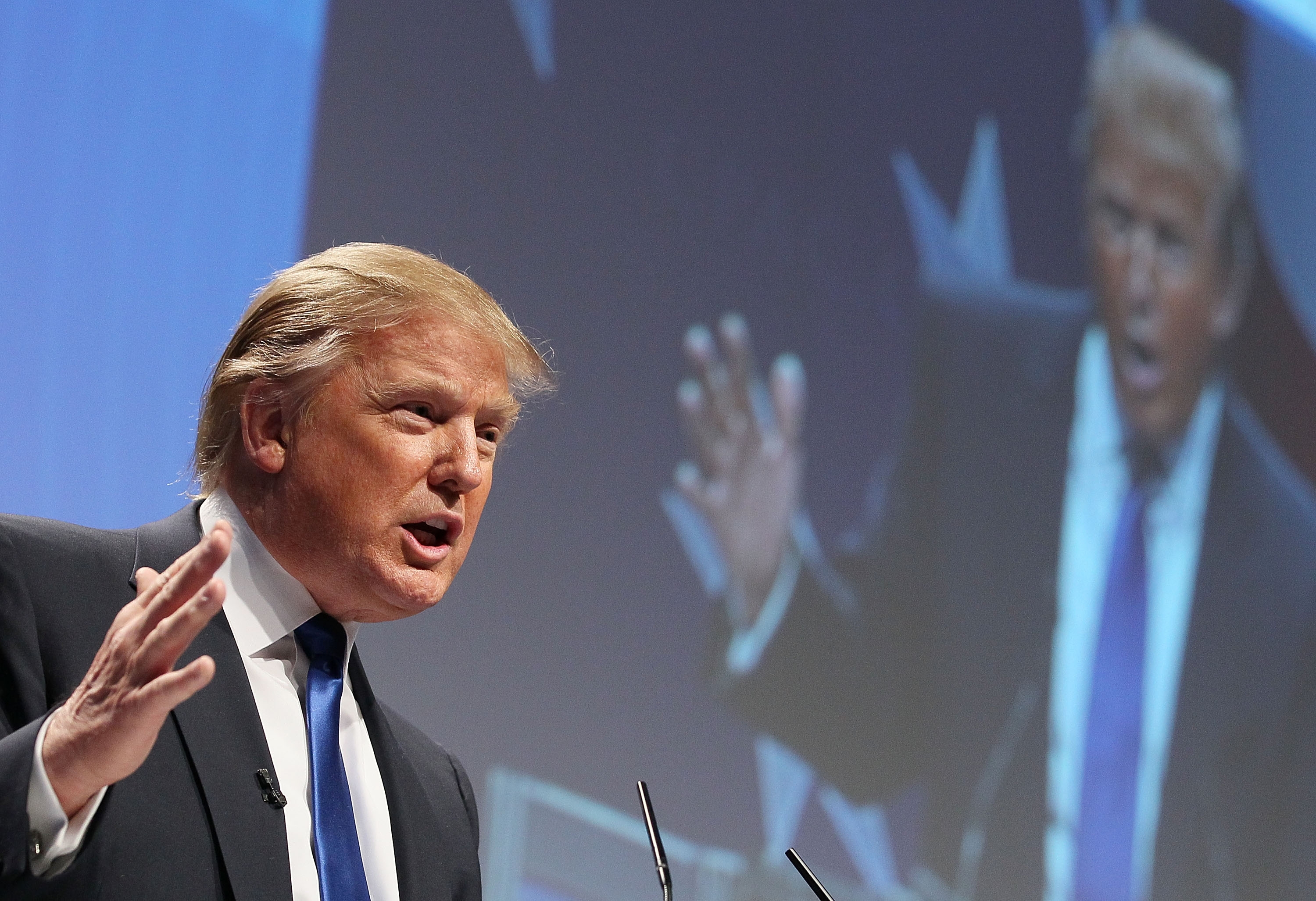 Speaking at a tax-day rally in West Palm Beach, Florida, on Saturday, billionaire real estate magnate Donald Trump was both charming and funny. He got many laughs, and his speech was at times coherent, at times nonsensical and rambling. He said many times he was considering running for President. It is easy to tell why he's popular at this stage in the game: he's funny, witty, confident, and entertaining.

Much of the laughter came while Trump was boasting, showing off his trademark ego. He told the crowd he was proud of the billions of dollars he's earned and relished the idea of showing the world how much money he has.

If he runs, he said: "I really look forward to disclosing my financials. I built a great company."

After much applause he said, "we've got a long way to go until I start using that. It's too early and to be honest, it's too trivial, but it's in the back of my mind"

His take on why, if he runs, he'd he a good president: "I'm a successful businessman, not a politician."

Most of the rambling, nearly hour-long speech was an attack on the leadership of the country.

"If China and these other countries out-smart us, I'm not angry at China. I'm angry at our leaders for letting it happen," he said to applause.

"We are living in like a third world country, it's all being done because our leadership is so bad," he said, comparing the luxurious airport in Dubai to America's apparently lacking airports.

He lamented that Obama held a state dinner for the President of China. On Hu Jintao, Trump said: "All he did was rip us off."

"If I run and win, our country will be respected again, and China, OPEC, and all of the many nations that are ripping off this great country of ours will be dealt with very, very differently," he said.

On specific issues, Trump said he would not raise taxes, but promised to make other nations pay the US for our help and military aid. Additionally, he offered conservative stances on the hot button social issues of the day, saying to applause: "I am pro-life. I am against gun control."

On health care he went right after the President: "I will fight and get rid of Obamacare, which is a total disaster."

This is a slightly different take from his past stance on health care, from his 2000 book "The America We Deserve." As reported by Slate Magazine, Trump wrote: "We must have universal healthcare.... I'm a conservative on most issues but a liberal on this one. We should not hear so many stories of families ruined by healthcare expenses."

The one time Trump faced some animosity from the crowd was when he discussed how Republican strategist Karl Rove dismissed Trump's claims against President Obama's citizenship and birth certificate.

Dismissing the crowd's loyalty to Rove, the chief political strategist to President George W. Bush, Trump said, "Whether you like him or not, George Bush gave us Obama... I'm not happy about it."

His rambling oratory gave him plenty of time to address current issues.

On the economy, which Trump said was horrible, he claimed his business acumen could be the cure: "I will create jobs, I will bring jobs back home."

Hitting on the subject of sending jobs overseas, Trump said: "When you call up your credit card company, you know who answers the phone? Someone from a foreign country, most likely India. What's all that about? What about us?"

On the conflict in Libya, Trump lamented the Obama Administration's limited military role of not seeking regime change: "We want nothing to do with the regime, but we want him out. It's a total disaster because nobody knows what the hell they are doing and Qaddafi is winning."

Trump claimed that the country is suffering because it is fighting three wars, and says that the money could be better spent at home: "We are spending many billions of dollars in Iraq, Afghanistan and Libya. Nobody even knows what our end game is. I want this money to be spent rebuilding roads and bridges. Of any candidate or potential candidate, I am the strongest on military spending and military strength."

He reminded the crowd of a controversial statement he made about the earthquake and tsunami in Japan, blaming the country for hurting the U.S. on cars and electronics: "For 30 years they've been ripping us off and taking advantage of us, but I still think we should help."

Overall, Trump continued to toy with a run for the Presidency. He said he believes the United States is broken, in decline and that he alone can fix it: "We are fast becoming a country of broken dreams."

President Obama, he said, will "most certainly go down as the worst president in the history of the United States."