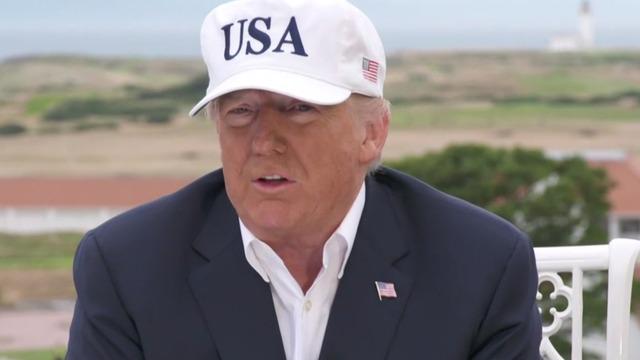 President Trump told CBS News ahead of Monday's meeting with Russia's President Vladimir Putin that he could have a "very good relationship" with Putin and wants to get along. Mr. Trump also said he may ask Putin to extradite the Russians indicted last week for their roles in hacking DNC servers during the 2016 election, but shifted most of the blame for the hack onto the Democrats and President Obama.

"Again, this was during the Obama administration," Mr. Trump said. "They were doing whatever it was during the Obama administration. And I heard that they were trying, or people were trying, to hack into the RNC, too, the Republican National Committee. But we had much better defenses. I've been told that by a number of people, we had much better defenses, so they couldn't. I think the DNC should be ashamed of themselves for allowing themselves to be hacked."

The comments came as the president sat for an interview over the weekend with CBS Evening News anchor Jeff Glor. They met at the Trump Turnberry Resort in Scotland.

The dynamics of Monday's meeting between the two world leaders are complicated by the allegations of Russian meddling in the U.S. election and the special counsel's search for links between Russia and members of President Trump's campaign. The president brought up the Russia investigation when asked about the tone he'd like to strike with President Putin.

Mr. Trump said the U.S. is "greatly hampered" by what he called "the Russian witch hunt, the rigged situation."

DNC Chairman Tom Perez tweeted in response to Mr. Trump's comments, "This is the president's response to a foreign adversary's military attacking our country. When will Trump act like a leader and put Americans first instead of Vladimir Putin?"

Despite the situation, Mr. Trump said he hopes the meeting with Putin can bring progress for both the United States and Russia.

"I'm representing our country," Mr. Trump said. "I wanna do great for our country. And I'm sure he wants to do well for his. But that doesn't make it mutually exclusive. I mean I think we can do something that's good for everybody."

The president also criticized NATO allies for not "paying their bills," as he put it. And he singled out Germany for its support of a gas pipeline deal with Russia.

Then, on Wednesday, the president will sit down with Glor for a second, post-summit interview in Washington.