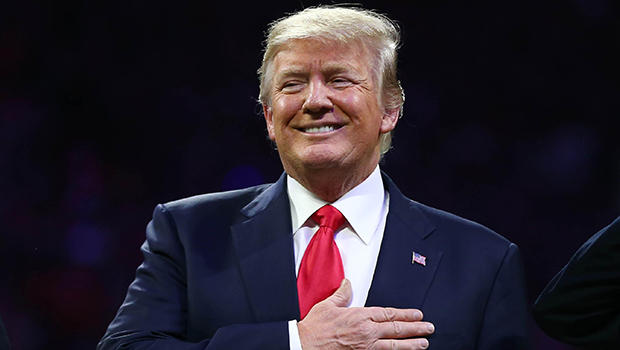 In a statement released just hours before the Super Bowl LII matchup between the New England Patriots and Philadelphia Eagles, President Trump has once again called for football fans to stand during the playing of the National Anthem as a sign of support for the nation's troops.

He issued the following statement from his Mar-a-Lago estate where he spent the weekend with first lady Melania Trump:

"As many Americans come together to watch the Super Bowl, Melania and I extend our greetings and appreciation for those who make occasions like this possible, particularly the brave men and women of our Armed Forces.

Though many of our Nation's service members are unable to be home with family and friends to enjoy this evening's American tradition, they are always in our thoughts and prayers.  We owe these heroes the greatest respect for defending our liberty and our American way of life.  Their sacrifice is stitched into each star and every stripe of our Star-Spangled Banner.  We hold them in our hearts and thank them for our freedom as we proudly stand for the National Anthem.

We send our best wishes for an enjoyable Super Bowl Sunday.  May God bless and protect our troops, and may He continue to bless the United States of America."

Last fall, Mr. Trump repeatedly lashed out against the NFL on Twitter for not intervening in the ongoing silent protests carried out by players taking a knee on the sidelines during the anthem at football games across the country.

In October, Vice President Mike Pence made a dramatic exit from a Colts and 49ers game after players knelt during the national anthem. He said that he would "not dignify any event that disrespects our soldiers, our Flag, or our National Anthem."

The president most recently addressed the controversy while delivering his first State of the Union speech on Tuesday:

"Young patriots, like Preston, teach all of us about our civic duty as Americans. And I met Preston a little while ago, and he is something very special -- that I can tell you. Great future," he said. "Thank you very much for all you've done, Preston. Thank you very much. Preston's reverence for those who have served our nation reminds us of why we salute our flag, why we put our hands on our hearts for the Pledge of Allegiance, and why we proudly stand for the National Anthem."

Later this evening, the president and first lady are set to view the Florida Atlantic University marching band and host a Super Bowl watch party at the president's Trump International Golf Club in Palm Beach before heading back home to the White House.