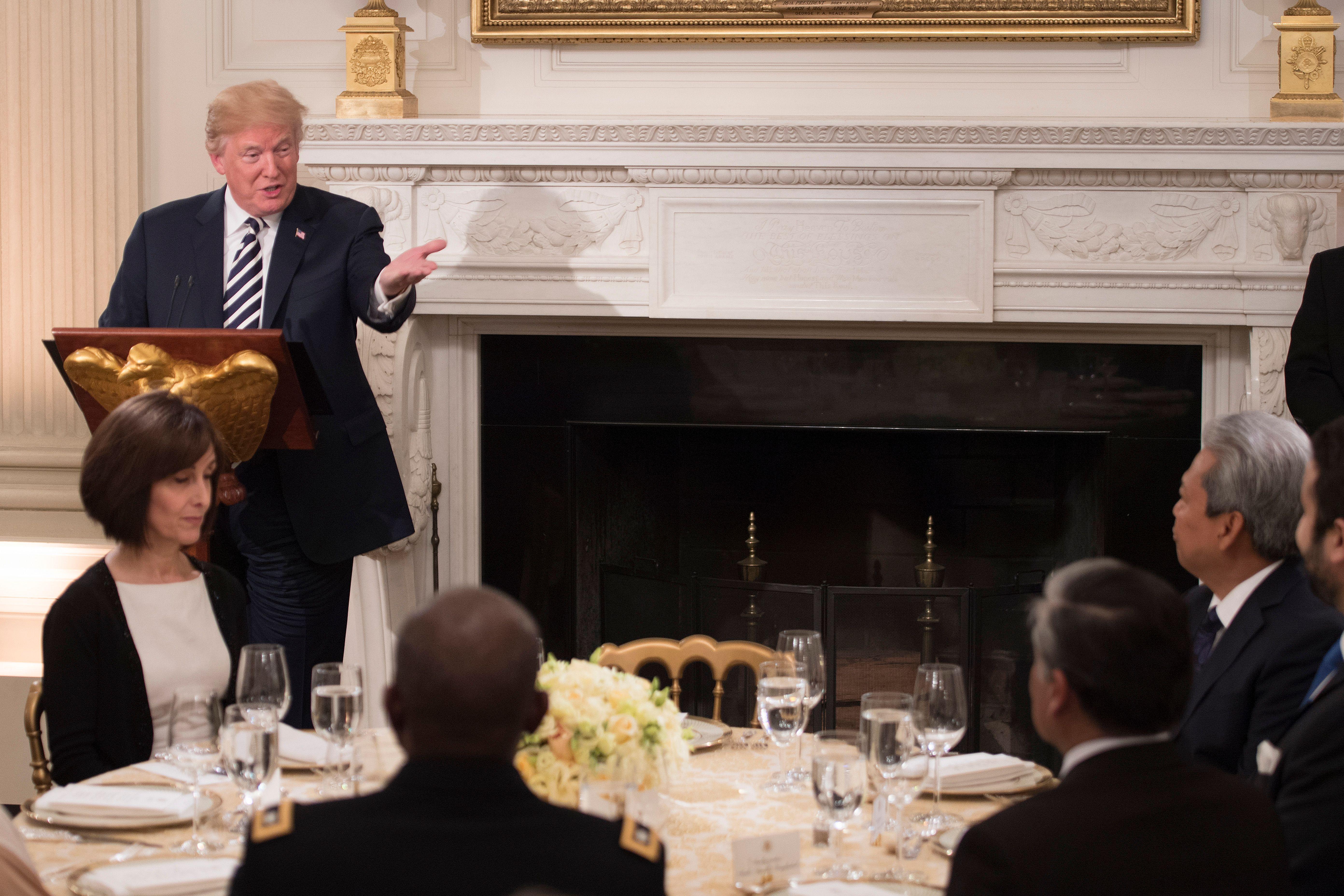 WASHINGTON — Wishing Muslims around the world a "Ramadan Mubarak" — a blessed holiday — President Donald Trump on Wednesday hosted his first White House dinner for Islam's holy month of Ramadan, an overture that surprised many in the Muslim community after he skipped hosting such a meal last year.

Speaking at an iftar dinner, which breaks the daylong fast, Mr. Trump offered a message of unity, recognizing members of the Muslim community at home and abroad.

"In gathering together this evening, we honor a sacred tradition of one of the world's great religions," he told an intimate audience that included Cabinet members and ambassadors from many Muslim-majority nations including Saudi Arabia, Kuwait, Jordan and the United Arab Emirates.

It was a dramatic departure from the inflammatory rhetoric Mr. Trump used during his campaign, when he called for a "complete and total shutdown" of Muslims entering the country, compared Syrian refugees fleeing civil war to a deadly snake and declared, "I think Islam hates us" in an interview with CNN.

Instead, the president spoke of "the renewed bonds of friendship and cooperation" forged with "valued partners" from across the Middle East and said Iftars "mark the coming together of families and friends to celebrate a timeless message of peace, clarity and love. There is great love."

He recalled his visit last year to Saudi Arabia — his first foreign trip — as "one of the great two days of my life."

"Only by working together can we achieve a future of security and prosperity for all," he said.

The dinner came as the Supreme Court considers legal challenges to Mr. Trump's travel ban, which critics say unfairly targets some Muslim-majority countries. A ruling is expected as early as this month.

Several Muslim civil rights groups pushed back, organizing a "NOT Trump's Iftar" protest at a park across from the White House. The groups say Trump's heated rhetoric has contributed to an increase in bullying and discrimination against Muslim Americans.

Sharif Aly, CEO of Islamic Relief USA, a humanitarian and advocacy organization, said the group was glad to see the White House had reinstated the iftar, "an event that should be hosted every year, just like the Easter Egg Roll, the Passover Seder and Christmas Open House."

But he urged the administration "to actively engage on issues impacting our beneficiaries," including the travel ban and proposed cuts to social welfare programs.

During his presidential campaign, Mr. Trump called for a "complete and total shutdown" of Muslims entering the United States. Last year, he drew international criticism for retweeting anti-Muslim videos posted by a far-right group in Britain. And his decision to recognize Jerusalem as Israel's capital was seen by many critics as an unnecessary provocation in the Muslim world.

The White House has defended the president's policies as necessary for national security.

Iftar dinners have been held regularly at the White House since the Clinton administration as a form of outreach to the Muslim world. Shortly after the 9/11 terrorist attacks, President George W. Bush hosted ambassadors and diplomats in celebration of Ramadan, declaring "evil has no holy days." President Barack Obama took up the tradition, saying that discriminating against Muslim Americans "feeds the lie" that the West is at war with their religion.

Last year, Mr. Trump broke tradition. Instead of hosting a dinner, the White House issued a statement on the Islamic holiday that focused heavily on the threat of terrorism, noting that recent attacks "steel our resolve to defeat the terrorists and their perverted ideology."

The White House struck a considerably warmer tone last month, when it released a statement from the president declaring "Ramadan Mubarak," a common greeting in Islam for a blessed holiday. The statement praised the Constitution for ensuring Muslims can observe the holiday "unimpeded by government" and did not mention terrorism.

"Ramadan reminds us of the richness Muslims add to the religious tapestry of American life," the statement said.