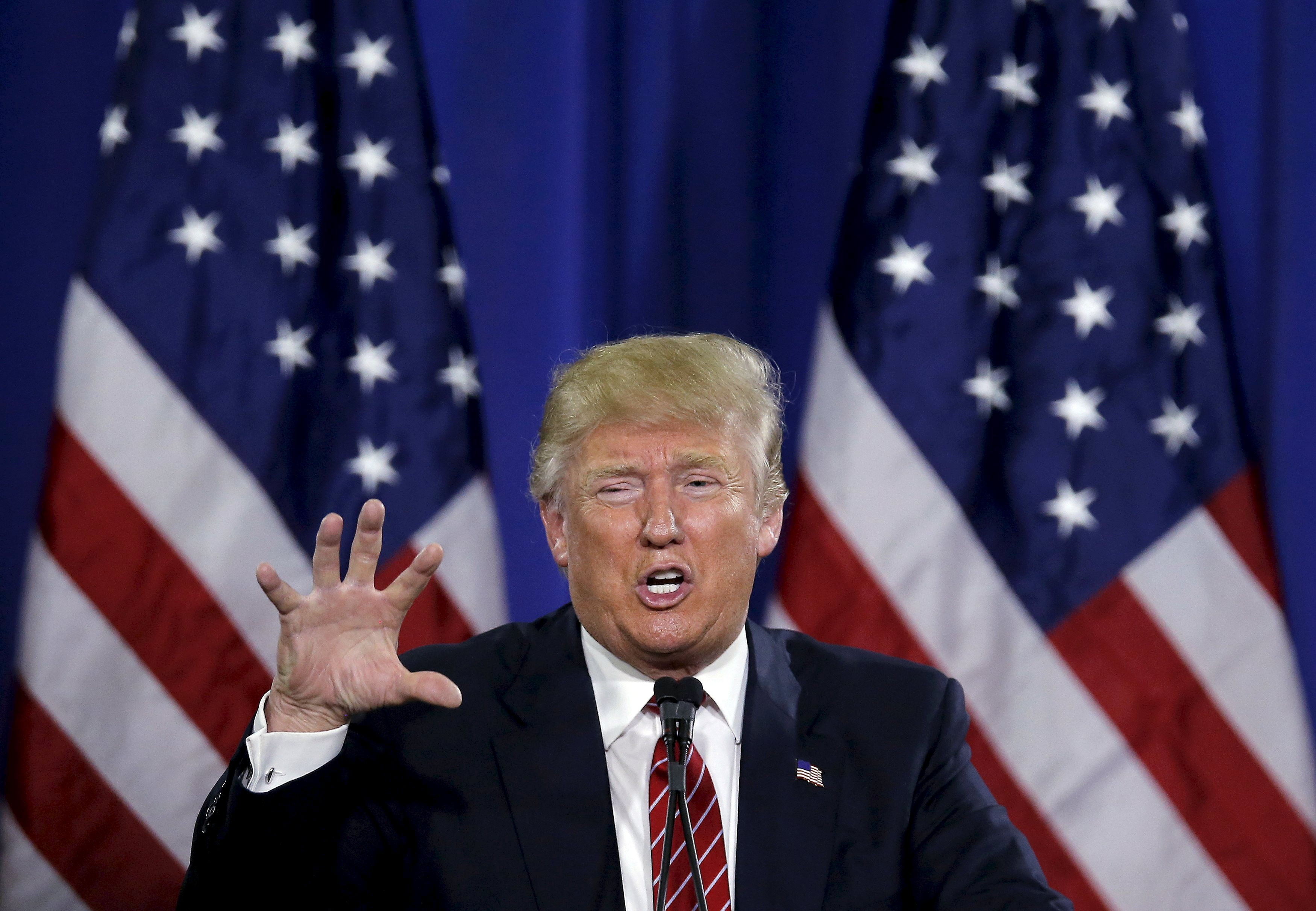 Shortly after 9 p.m. eastern, a triumphant Donald Trump took the stage for yet another election night press conference and stopped just short of declaring himself the presumptive nominee.

Trump sounded more and more like someone who thought he would inevitably be the standard bearer of the Republican party. He talked up the importance of winning down-ticket House and Senate races. He even extended an olive branch to House Speaker Paul Ryan, who Trump recently said would "pay a big price" if they couldn't get along.

"I want to thank Paul Ryan," Trump said. "He called me a couple days ago. He could not have been nicer. He was very encouraging. And I have great respect for Paul Ryan. Great respect."

But beyond his triumphant declaration of victory, the press conference served as an infomercial for Trump products. To Trump's left, there were strategically placed Trump water bottles and packages of Trump wine. There were also steaks that Trump claimed were Trump Steaks, but didn't have the label on them.

They were whisked away quickly from reporters after the press conference. This may have been because the label on the steaks showed packaging from Bush Brothers, a West Palm Beach-based meat company. Trump Steaks is no longer in existence, except as a flashback on Sharper Image's website.

Before Trump took the podium, invited guests were drinking out of Trump water bottles. The name was seemingly plastered everywhere at the Trump National Golf Club in Jupiter, Florida.

"By the way, the winery, you see the wine," Trump said. "It's the largest winery on the East Coast. I own it 100 percent, no mortgage, no debt. You can all check."

He was referencing his winery in Charlottesville, Virginia -- and even offered reporters some to take home.

"You have the water, you have the steaks," Trump said. "You have the airline that I sold. What's wrong with selling? Every once in awhile you can sell something. You have the wines, and all of that. And Trump University, we're gonna start it up as soon as I win the lawsuit. Does that make sense? Okay?"

Trump bought Eastern Airlines' shuttle service in the late 1980s to try offer luxury flights in the Northeast. But due to enormous debt, he was forced to sell it off to creditors.

That Trump would think about relaunching Trump University again is likely to raise eyebrows. It has been routinely attacked by Trump's opponents on the trail and multiple groups are running commercials in Florida - which votes next week - mocking him over the embattled service. Trump claimed to offer a top-notch real estate education to thousands of students. However, he is facing multiple lawsuits - including one $40 million case brought by New York's attorney general, that allege the program was a fraud.

Another hallmark of Trump press conferences was in full effect: the mocking of reporters. The campaign placed reporters, once again, behind the invited guests at the press conference, meaning they had to shout the questions from the back of the room over the guests - who would often applaud or jeer them.

One reporter asked about an television ad taken out by conservative American Future Fund Political Action that hit Trump for his repeated use of profanity on the trail.

"I'll be honest with you, I saw it. I was a little concerned with that ad until I saw it. I think it's better than any ad I've ever taken from myself," Trump said, while laughter erupted from the room.

The same reporter followed up asking how one would explain the ad to children. Trump mocked the reporter to the delight of the guests.

"Oh, you're so politically correct. You're so beautiful. Oh. He's so -- oh, I know," Trump said, derisively. "You've never heard a little bad, a little off language. I know, you're so perfect. Aren't you perfect? Aren't you just a perfect young man? Give me -- hey, give me a break. You know what, its stuff like that, that people in this country are tired of."

On a question about trade, Trump interrupted a reporter to tell him no one was listening to him.

Even with Trump continuing to dominate the race, he still trained fire on his chief rivals, Texas Sen. Ted Cruz and the fading Florida Sen. Marco Rubio. It was a laundry list of attacks. Trump accused both of illegally coordinating with super PACs. With Cruz, Trump initiated the political equivalent of a scoreboard taunt.

With Rubio, Trump derided his recent attempts to get personal on the trail with Trump, whether it was making fun of misspelled tweets or alleging that he had small body parts.

"[Rubio] became hostile about two weeks ago and it didn't work. See? Hostility works for some people. It doesn't work for everybody. Okay?"

"He would've been better off if he kept the original pitter patter going. But this didn't work."

Given Trump's dominance in the Republican race and Rubio's struggles, it would be hard to find anyone to dispute that.