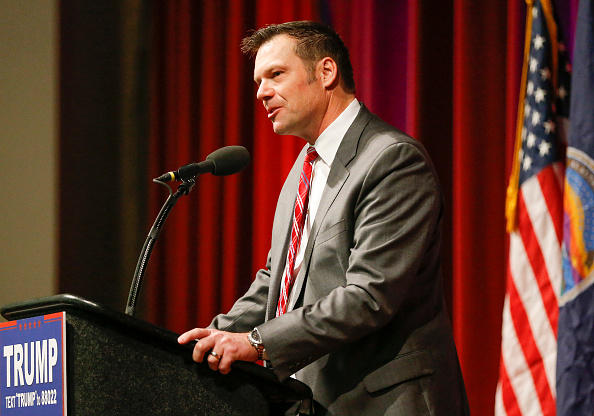 President Trump endorsed Kris Kobach, an ultra-conservative candidate for governor of Kansas, in a tweet Monday. "Kris Kobach, a strong and early supporter of mine, is running for Governor of the Great State of Kansas," Mr. Trump tweeted. "He is a fantastic guy who loves his State and our Country - he will be a GREAT Governor and has my full & total Endorsement! Strong on Crime, Border & Military. VOTE TUESDAY!"

Kobach is one of several Republicans running for the Republican gubernatorial nomination. His opponents include incumbent Gov. Jeff Colyer, who took office in January. Colyer had been lieutenant governor under Gov. Sam Brownback, and was elevated to his current job when Brownback accepted a post in the Trump administration, heading the Office of International Religious Freedom.

Democrats hope that Kobach will prove too divisive in a general election, which would give them a rare chance at victory in deep-red Kansas. A well-known immigration hardliner, Kobach signed up to help run Mr. Trump's now-defunct commission that sought to find widespread voter fraud in the 2016 election. He also supports strict identification requirements for voting, including a law in Kansas that was recently struck down by a federal judge.

It is unusual for a president to turn on an incumbent governor of the same party like this. But Kobach has developed close ties with the White House and advises the administration on immigration policy. He was also the only statewide official to endorse Mr. Trump ahead of the state's presidential primaries in 2016.

If Colyer is defeated, he would be the first sitting Kansas governor to lose a primary since 1956, according to the Associated Press.