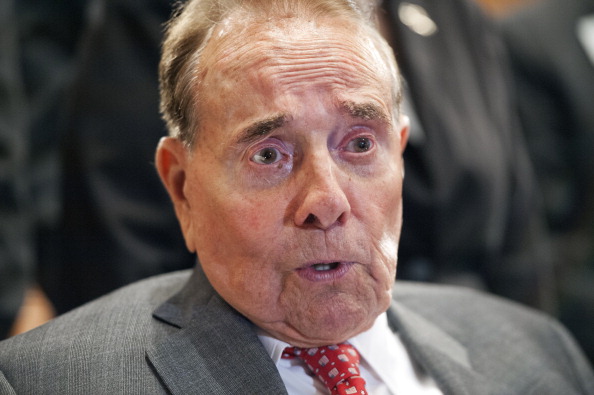 WASHINGTON -- President Trump is on Capitol Hill Wednesday afternoon to attend the Congressional Gold Medal ceremony for former Sen. Bob Dole. The Kansas Republican and the former Senate majority leader was the GOP's presidential nominee in 1996.

Mr. Trump called Dole a "true American hero" and a leader admired by all.

"Bob, that is the legacy you have left our nation and it will outlive us all," he said.

"Mr. Speaker, I'm extremely honored to accept this great honor and I thank you for presenting it to me," said Dole, who joked that he thanked everyone who said kind words about him even though "they're probably not true, but they were nice."

"Bob Dole always stood by what is just and what is right," said Speaker Paul Ryan, R-Wisconsin, who said that Dole has been a "resounding voice" for the hungry and for those with disabilities.

Dole is also a decorated World War II Army veteran who nearly died when he was shot in his upper back and right arm by Nazi machine gun fire in Italy in 1945. He underwent multiple operations and a long recovery, and while his injuries permanently affected his mobility, Dole never publicly complains and famously holds a pen in his right hand to try to draw attention away from his injuries.

House Minority Whip Steny Hoyer, D-Maryland, said that he worked across the aisle with Dole on the Americans with Disabilities Act.

"How appropriate it is to give the gold medal to someone who is the gold standard," Hoyer said.

He's considered one of his party's best dealmakers, a distinction Trump has given himself, as well. But Trump and the Republican-led Congress are currently mired in a pitched budget battle that could end in a government shutdown at the end of the week if not resolved.