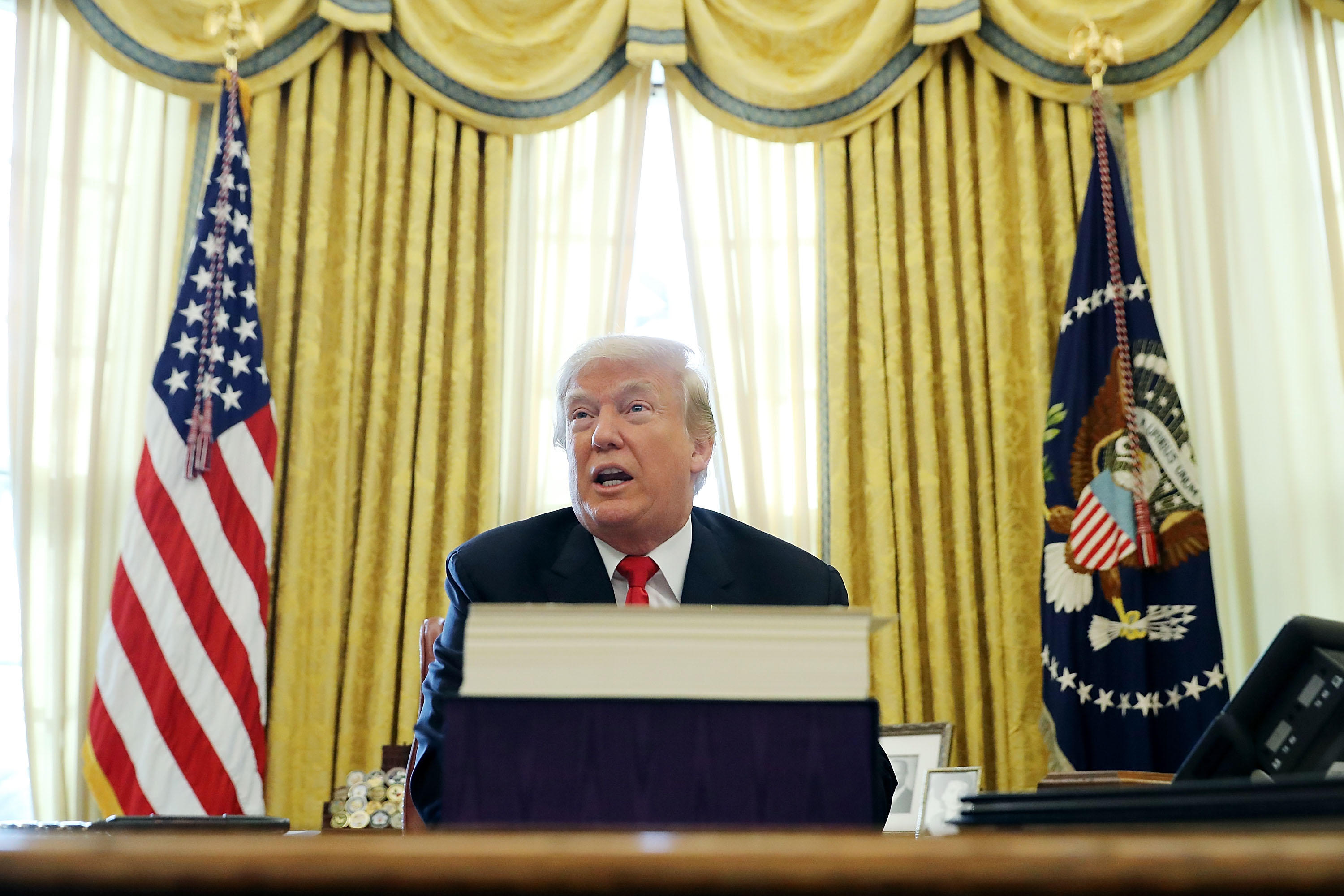 Pushing the Republican tax package through Congress was only half the battle for President Donald Trump. Now that it's the law, convincing Americans that it was a good idea is not just a political imperative but an economic one, too.

To boost GOP prospects in the midterm elections, Trump needs to show that Republicans are delivering on long-promised tax relief. And to meet the ambitious economic growth projections underpinning the law, the White House needs businesses and ordinary Americans to boost their spending in response to the tax changes.

Aiming to advance both goals, the administration is deploying Trump, Vice President Mike Pence, Cabinet officials and staff throughout the country to anchor events publicizing the law and its benefits to workers and employers.

As part of that sales effort, Trump on Wednesday welcomed to the White House seven representatives of companies that have passed on the benefits of the tax law to their employees.

"It is not crumbs," Trump said after the employees described using the bonuses they've received to fund a wedding, a vacation, and retirement. It was a subtle brush-back to House Democratic leader Nancy Pelosi's effort to use the word to minimize the scale of the bonuses.

Pence, at the same time, was talking up the tax cuts to workers at a manufacturing company in West Virginia.

The law provides steep tax cuts for corporations, with more modest breaks for most Americans — though some in the middle class from high-taxed states will pay more — and has suffered in the polls. But the White House hopes that is beginning to change as a parade of businesses announce additional investments in the U.S. or provide income boosts to their employers. The first benefits of the law are just beginning to be felt by everyday taxpayers.

The charm offensive already is underway: First daughter and White House senior adviser Ivanka Trump traveled to South Carolina on Jan. 26 with Republican Sen. Tim Scott to highlight the expansion of the child tax credit under the law to a predominantly female audience. An official said she would engage in more of those events going forward, as she did in the run-up to the law's passage.

Inside the West Wing, the White House political office is overlaying the list of companies that have announced new investments or bonuses for their employees on a map of target races in the 2018 midterms, providing an outline for travel in the coming months. The events will be timed to coincide with filing deadlines and other opportunities to highlight how the law is affecting people, officials said.

In the coming weeks, Trump is expected to mark increases in many employees' take-home pay as the IRS withholding tables reflecting the law's adjusted rates go into effect by Feb. 15.

According to a tally of public announcements by Americans for Tax Reform, a conservative group that supported the tax law, about 3 million workers have gotten bonuses, raises or larger payments to their retirement accounts since the tax law was signed.

The nonpartisan Tax Foundation estimated that the $1.5 trillion law would increase gross domestic product by 1.7 percentage points over a decade. And fiscal hawks have expressed optimism that accelerating economic growth — and subsequent revenues — will cut into the legislation's cost.

At the White House Wednesday, Trump highlighted companies that have raised the minimum wage they pay workers or that have brought billions back to the U.S. from overseas. "We also have massive investments coming in," he said.

"We didn't know this was going to happen so much," he said Wednesday.

The White House is not actively organizing the highly publicized announcements from the likes of Apple and Walmart. Instead, the administration casts them as a "free-market response" to the law. Tony Sayegh, the assistant treasury secretary for public affairs, said the announcements are "helping shift so much of the misinformation that was put out there."

Outside groups that promoted the law are lining up to help the White House sell it. Jay Timmons, the president and CEO of the National Association of Manufacturers, said "now it's up to business to deliver" on the promises they made as they advocated for their tax breaks.

His group has asked its 14,000 members for data on how the legislation has improved their businesses and the lives of their employees, and is preparing to share it with the White House and congressional leadership. "Our manufacturers are feeling optimistic," Timmons said, adding that the White House effort would only help their efforts.