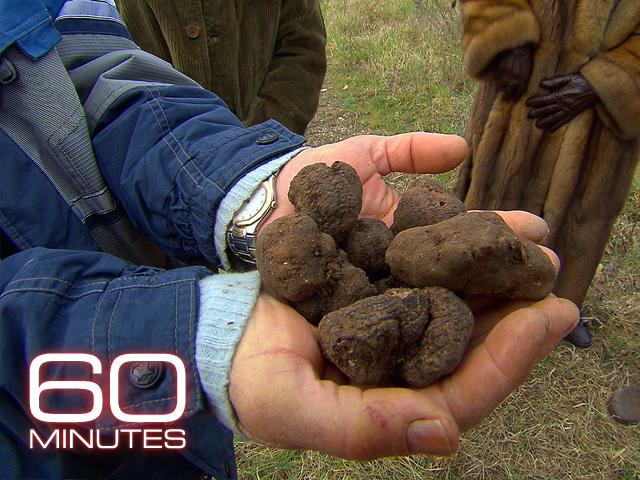 European white truffles can sell for as much as $3,600 a pound, making them and their fellow fungi the most expensive food in the world. One two-pound truffle recently sold for more than $300,000. All of which has brought organized crime into the truffle trade, creating a black market and leading to theft of both truffles as well as the highly valued truffle-sniffing dogs. Add to that the influx of the inferior Chinese truffles -- masquerading as their European cousins -- and you've got trouble with truffles. Lesley Stahl reports.

The following is a script of "The Most Expensive Food in the World" which aired on Jan. 8, 2012. Lesley Stahl is the correspondent. Ira Rosen, producer.

Just a couple of shavings of black truffles from France - known as black diamonds - can cost hundreds of dollars in a restaurant in Paris. White truffles from Italy can cost more than three times as much.

Truffles are a fancy, delicious delicacy - some say an aphrodisiac - and, ounce for ounce, the most expensive food in the world. If you go to France and Italy, as we did, you learn quickly that truffles are under siege because they're becoming scarce. They're being trafficked like drugs, stolen by thugs and threatened by inferior imports from China.

In the beautiful Italian province of Perugia, truffle hunters roam the frosty hills with their trained dogs, who sniff out these lumpy mushrooms when they're ripe, one at a time, as they have for centuries.

Truffles grow wild, underground, usually at the base of an oak tree. They used to use pigs, but they ate the truffles.

Olga Urbani: Very rich American people they only see truffles on the table of a very elegant restaurant. They don't see this. Now you know why they are expensive, right?

Olga Urbani may be the only person in the world who goes truffle hunting in a full-length fur coat and a Caribbean tan, but in the truffle business, she can pretty much do what she wants. Her company, Urbani, controls 70 percent of the world's truffle trade.

Urbani: When you find the truffles, it's like to have a miracle.

Other countries, including the U.S. have tried cultivating truffles, with only limited success. It's the combination of European red soil and rainy summers that produce an especially rich, earthy flavor. The price these truffles command makes hunters act like they're mining for gold.

And it's why the hunters value their dogs more than just about anything!

These truffles will go right to the Urbani factory, where they're washed, sorted and either frozen or canned - or flown fresh to fancy restaurants like New York's DB Bistro Moderne, home of the $150 hamburger smothered with truffles. A few shavings on pasta can run you even more. In 2010 at an auction in Macau, this two-pound white truffle sold for $330,000, a record amount.

Stahl: It's not like agriculture. People don't put a seed in the ground. And they're a fungus.

Stahl: So the farmer really can't make it happen.

In France, the truffle is so revered that in the village of Uzes, a special mass is held in its honor. Churchgoers not only put money in the collection plate, they also add truffles. There's a reason for the special prayers: Because of climate change, the harvests are down from an annual haul of 2,000 tons of truffles 100 years ago, to just 30 tons today. The scarcity and high prices have attracted elements of organized crime who've turned the truffle trade into something resembling the drug trade.

Bruno: The reality is, behind the popularity of the truffle lies a dangerous world.

[Bruno: My house is your house.]

One of Europe's most famous truffle connoisseurs is the larger-than-life French chef and restaurateur known simply as Bruno.

Bruno: Yes, it's a good name? Yes, the Mafia, yes. You understand? It's very dangerous for me.

At Bruno's restaurant, in the heart of Provence, wealthy Europeans helicopter in from Paris and Monaco, just to eat lunch. Bruno goes through about 5 tons of truffles a year, which his chefs shave on everything from potatoes to this amazing lobster dish.

But Bruno says the growing black market has led to people coming to his place not just to eat truffles, but to steal them.

Stahl: The robbers came and got your truffles?

Bruno: They didn't steal my money! They stole my truffles!

Some of the stolen truffles, we were told, are brought to markets like this one in Richerenches where middle men sell out of the backs of cars or trucks. But large quantities change hands in back alleys.

We witnessed this transaction where the buyers and sellers wanted their identities hidden. In less than a minute, 50 pounds of truffles were exchanged for 30,000 euros - about $40,000 - with no questions asked about where the truffles came from.

Michel Tournayre: There's a problem of confidentiality and secrecy. And that encourages a Mafia-like attitude.

Michel Tournayre, a third generation truffle farmer, says that local trufflers have been car-jacked, beaten with baseball bats and even killed. Thieves came and stole his truffles, his trees and worse, his dogs.

Stahl: When they took your dogs, what did you do?

Tournayre: I looked for them all over Europe. I found a world I didn't know about. It's a world that's rotten to the core.

Stahl: Did you find your dogs?

But it's not criminals or climate change that worry the trufflers the most. It's China! For years, Chinese farmers used truffles as feed for their pigs. That was until a businessman supposedly said, "The hell with the pigs, let's feed the French!" Even if the taste of a Chinese truffle leaves something to be desired.

Bruno: The Chinese truffle is worthless. No-- no-- no taste, and no smell.

Stahl: No perfume, you couldn't smell it. Nothing.

Stahl: No taste? If I went to China and took it out of the ground, it still wouldn't taste as good?

Urbani: It's the truffle itself. It's like eating a piece of wood.

She says that's because of the way truffles in China are farmed. Unlike in France, where dogs smell when a truffle is ripe, the Chinese rake at the earth with no dogs - as a CBS News producer in China discovered - and harvest the truffles the minute they find them. Which explains why - while the two truffles look the same - the price is drastically different.

Stahl: And they think you won't see it?

On the day we were at the Urbani factory, sorters found a number of Chinese truffles mixed in with that day's purchases. They were separated out into specially marked red baskets. More and more, Chinese truffles are slipped in with the good French or Italian strains. Experts say it's like cutting flour into cocaine.

Stahl: But look, your own farmers or middle men, are putting the Chinese in with your truffles.

Stahl: You're telling us you have to be on guard, not from the Chinese, but from your own people.

Stahl: And then you're selling them.

Food importers and middle men are bringing 28 tons of Chinese truffles into France a year. And many are being passed off as the real thing in some French restaurants. Michel Tournayre says he's brought home some slices from his dinners out and studied them under a microscope in his lab at home to check their origin.

Tournayre has tried to blow the whistle on the restaurants that sell Chinese truffles at French prices, but the police have more important matters on their plate and rarely do anything about it.

Stahl: Twenty, 28 tons of Chinese truffles come into France every year? Where do they go?

Bruno: I think I know where they go, but I'm not gonna tell you.

Stahl: If you tell me, you're in trouble, is what you're saying? They'll hurt you?

Bruno: Everybody is in danger in this business.

So we began to look for Chinese truffles ourselves. We found this product that is exported to the U.S. On the front of the can it says "Black Winter Truffles, product of France", while on the back in small print it says "tuber indicum", the Latin name for Chinese truffles.

When we showed one of the cans to the Urbanis, at a kitchen at their headquarters, it seemed to ruin their lunch.

Olga Urbani: This makes us crazy. This destroys all the tradition of the truffle. It's an entire life that goes in the garbage. It's unbelievable.

American law doesn't require a distinction between varieties of truffles. And this product does sell for considerably less than the best of France. But American consumers are being deceived into thinking they're getting the finest quality at a bargain price. The owner of this brand is Pierre Jean Pebyre.

Stahl: This is your company, right?

Stahl: Okay, so we found this in the United States.

Stahl: But it's Chinese.

Pebrye: It's Chinese, yes. This is... tin - a French product. The truffles...If I make the tin in China, it's a Chinese truffle.

He was saying that since the truffles are packaged here, he can legally write "product of France" on the label.

Stahl: It feels like I'm being tricked into thinking I'm buying French truffles, you know?

And there's another problem: spores from the Chinese truffles are infecting the European soil and taking it over the way the Kudzu weed has taken over parts of our own Southeast. It began to happen in Italy, so the Italians made importing Chinese truffles illegal and there's a move in France to do the same.

Tournayre: They are putting into danger the crown jewel of French gastronomy. If one day by accident our plantation starts producing Chinese truffles, we are dead.

The great fear for Michel Tournayre and the other trufflers in France is that the Chinese will do to their precious delicacy what they have done to Louis Vuitton bags: produce a knock-off that looks the same, but is of lower quality. But in this case, it could just put them out of business.