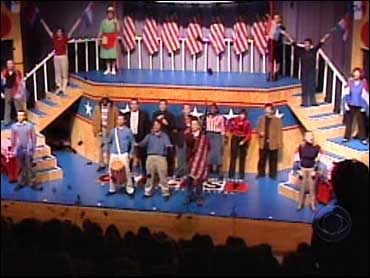 Iowans are lining up for a caucus … "Caucus: The Musical."

At the center of this story is the "perfect" Iowa farmer and his undecided family.

In the musical, a waitress character sings at a diner: "Iowans know well / that a candidate will sell / his soul to earn one measly caucus vote!"

On stage, actress Julie Bell plays a liberal candidate vying for votes. But backstage, she admits she hasn't even picked a party.

And she won't decide that until the night of the caucus?

"It's kind of funny when you watch the Iowans watch the play," Bell said. "They kind of light up and it's that 'yeah, yeah, I know that guy!'"

Some of it is ripped straight from the headlines - but written four years ago.

"Many of the things I wrote about that were fictional have now come true, and we're loving it," said playwright Robert Ford. "We hit everybody and we hit everybody hard."

It's a light-hearted look at a serious subject, with a not-so-subtle take-away: "Get off your sorry a** and vote!"