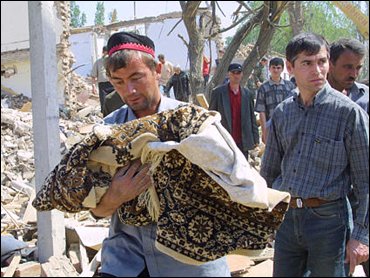 A truck bomb explosion ripped through a government compound in northern Chechnya on Monday, killing at least 37 people and wounding more than 100.

The blast underlined the violence that continues to roil Chechnya even as the Kremlin claims the more than 3½-year-old war is winding down and normal life is returning.

The explosion, which had the force of at least 1.3 tons of TNT, destroyed a two-story building in the town of Znamenskoye housing the office of the intelligence agency that leads Russia's campaign in Chechnya, said Maj. Gen. Ruslan Avtayev, chief of the Chechen branch of the Emergency Situations Ministry.

Officials said the building was full of workers after May holidays, and that most of the victims were civilians.

The blast also damaged nearby buildings and residences.

Thirty-seven people were killed and 197 wounded, including 57 hospitalized with serious injuries after being pulled from the debris, according to officials of the Emergency Situations Ministry for southern Russia.

Other officials gave higher estimates of the toll. An official in Chechnya's Justice Ministry said on condition of anonymity that at least 43 people were killed. He said the Federal Security Service building, the district police headquarters and the local administration building were in ruins and six apartment houses were badly damaged.

Speaking on state-run television, Federal Security Service chief Nikolai Patrushev said a truck carrying explosives blew up after it was halted at a security barrier about 30 yards from a concrete wall that protects the government buildings.

But the chief of police in the Nadterechny district, Usman Tunguzbiyev, said the truck crashed through the barrier and that soldiers standing guard opened fire.

The blast left a crater some 16 feet deep and 33 feet wide, and shattered windows 500 yards away. TVS broadcast footage of the rubble of at least one building and the gutted shell of another. The blast knocked out electricity and water for the whole town, it reported.

President Vladimir Putin said the blast was a terrorist act meant to halt efforts to bring peace to Chechnya.

"All such actions are aimed at one thing: stopping the process of the settlement of the situation in Chechnya, the process of political settlement," Putin told Cabinet members in televised comments. "We cannot and will not allow anything of the kind."

Putin urged a swift agreement on delineating the division of power in Chechnya between federal and regional authorities, ordering that a group be formed to submit proposals by Oct. 1, the Interfax news agency reported.

Chechen voters approved a constitution in March that cements the region's status as part of Russia.

Monday's blast was the latest in a string of vehicle bombings in Chechnya, a technique the outmanned and outgunned rebels have used to strike at Russian forces and their Chechen colleagues.

In December, a truck-bombing at the headquarters of the Moscow-backed Chechen administration in the capital Grozny killed at least 70 people. The truck had passed through numerous checkpoints and the blast exposed the still-fragile state of security even in the most heavily guarded part of the war-shattered region.

Northern Chechnya is considered the most stable district. It was the first area to come under control of the Russian forces that entered the republic in 1999, starting the second war in a decade.

Znamenskoye houses a large refugee camp and has served as headquarters for international human rights monitors.

Russia's government minister for Chechnya said it would be "senseless" to beef up the Russian military contingent in the region — tens of thousands of troops — as a result of the attack.

"Large-scale hostilities are long gone, and it is impossible to prevent a terrorist attack with a large number of troops," Interfax quoted Stanislav Ilyasov as saying. He said halting terror attacks would require "targeted operations by the secret services."