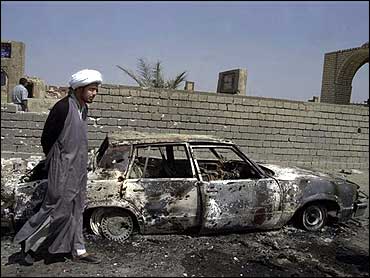 By striking a tentative cease-fire in Najaf, the U.S.-led coalition appears to have cooled the hotspots that helped make April the bloodiest month of the war: the southern cities where a Shiite militia roamed and the besieged city of Fallujah.

The U.S.-led coalition on Thursday agreed to suspend offensive operations in Najaf after Shiite leaders struck a deal with radical cleric Muqtada al-Sadr to end the fighting there.

That follows the agreement last month under which a brigade composed of former Iraqi soldiers took over security in Fallujah.

Fallujah and Najaf were the flashpoints in April's violence, during which 126 soldiers were killed in combat. May has been less bloody, but still dangerous, for U.S. troops, with 53 U.S. deaths in hostile action.

Whether those truces hold — and what sort of security they provide — is a key question as the June 30 deadline for the handover of power to Iraqis approaches.

In Najaf, it was unclear if the United States would press its demand that al-Sadr be arrested. A Shiite member of the Governing Council, Abdul-Karim Mahoud al-Mohammedawi, warned that arresting al-Sadr would "complicate the issues" and lead to "an unending revolution."

In Fallujah, observers say a virtual Islamic mini-state now exists: Anyone caught selling alcohol is flogged and paraded in the city. Men are encouraged to grow beards and barbers are warned against giving "Western" hair cuts. Three roadside bombs exploded Thursday near an American convoy south of the city, witnesses said.