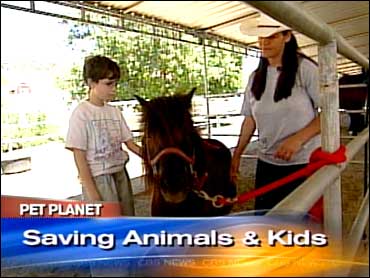 Some 30 miles north of Los Angeles, in Santa Clarita, Calif., Ellie Laks and partner Jay Weiner have devoted their lives to giving abused and unwanted farm animals a second chance. And now, those animals are helping kids who've had troubled lives.

Early Show resident veterinarian Debbye Turner Debbye Turner, stopped by The Gentle Barn on a day when a group of youngsters from Los Angeles was visiting.

The Gentle Barn is, Turner reports, no ordinary farm. It's a safe haven, a refuge for some sixty animals.

And to each of them, Turner says, The Gentle Barn is a last resort.

"Every one of our animals have been rescued," Laks says.

"When I was growing up … animals were always my healers, teachers and friends. They were always there for me," she says.

So, Laks made it her mission to be there for them.

"They've had their hearts broken, they've been hurt, and they come here to have a second chance," Laks says.

Then, she got an idea: Saving animals from trouble might inspire kids who are in trouble.

"We work with kids on probation, kids in gangs, kids on drugs, kids from the inner city, and they get to come out here and learn compassion," Laks says.

Why, Turner asked, does she have such compassion for kids of that nature?

"They're me," Laks quickly responded. "I had a very lonely childhood. … And I felt like I connected more with animals than I did people."

And many of the kids who come to The Gentle Barn can relate to what the animals have gone through, Turner points out.

"All our animals have been rescued from abuse," Laks told the group of kids there when Turner was. "So, all our animals, yeah, every single solitary animal … has been through something really really, really horrible. … like you (the kids she was addressing)."

"A woman who was his temporary mommy used to come down and beat him up when she was drunk," Laks' partner, Jay Weiner, told the group.

The animals' stories touched the hearts of the visiting youngsters.

To see Turner's report, and more,

click here
and
here
.
From the Gentle Barn Web site:

It was founded in 1999 by Ellie R. Laks and is now run by Ellie and her partner, Jay Weiner. Ellie and Jay had similar childhoods, in which they both felt alone, unseen and misunderstood. For both of them, it was from animals that they received their attention, friendship, and unconditional love. Having been saved by animals, it was their dream to have a place that allows children to be supported and healed by animals, like they had been. Ellie and Jay live on the property with their three children.

Ellie and Jay see their 60 rescued farm animals as teachers, healers, friends and heroes. Every animal at their place has been rescued from horrible abuse, neglect, and loneliness, and yet they have all survived using forgiveness, trust, love, and courage. These are the qualities that Ellie and Jay strive for on a daily basis, and that they teach the children that visit The Gentle Barn.