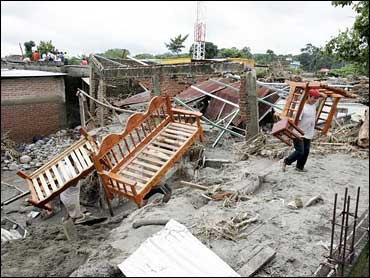 Tropical Storm Barbara churned toward Mexico's southern Pacific coast and was expected to make landfall Saturday near the Mexico-Guatemala border, an area notorious for its vulnerability to flooding.

A tropical storm warning was in force from Sipacate, Guatemala, to Barra de Tonala, Mexico, and the U.S. Hurricane Center in Miami warned that Barbara could unleash life-threatening flooding and mudslides.

The Mexican government issued a decree opening up disaster emergency funds for parts of the southern states of Oaxaca and Chiapas. Rain was already being reported in some parts of Chiapas, and authorities were readying shelters and evacuating people in vulnerable areas.

With maximum winds of nearly 50 mph, the storm was centered about 210 miles southeast of Salina Cruz, Mexico, about 30 miles offshore of the Mexico-Guatemala border.

Barbara was moving northeast at 8 mph, and was expected to turn and hit land just north of the Guatemalan border sometime Saturday, the hurricane center said.

The storm was forecast to dump up to 10 inches of rain over portions of southeastern Mexico and Guatemala, with accumulations of up to 20 inches in parts.

The area was devastated by Hurricane Stan in October 2005, when heavy rains sparked flash floods and mudslides in the mountainous terrain. Seventy-one people died in Chiapas, and 654 people were killed and 828 left missing in Guatemala. Another 71 died in El Salvador.