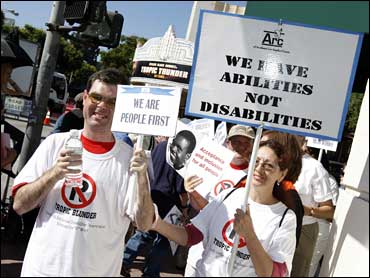 Protesters stole the scene at the premiere of Ben Stiller's new comedy, "Tropic Thunder." They're upset about the repeated use of the word "retard" in the film, reports CBS' The Early Show correspondent Ben Tracy.

The new movie goes too far for groups representing the mentally disabled.

Dozens of people from organizations such as the Special Olympics and the American Association of People with Disabilities protested the movie-industry spoof across the street from the film's Los Angeles premiere at Mann's Bruin Theatre on Monday. The protesters held up signs with slogans such as "Call me by my name, not by my label" and chanted phrases like "Ban the movie, ban the word."

"I think it's open to interpretation and that's the great thing," Robert Downey Jr., who stars in the film, told APTN at the Monday night premiere. "You know, if I want to protest something because it offends me that's my right as an American, and it's also any artist's right to say and do whatever they wanna do."

The groups are outraged over scenes featuring the liberal usage of a disparaging term used to describe the mentally disabled. In the movie, director and co-star Ben Stiller plays a fame-hungry actor cast in a war movie who previously had a role as a mentally disabled character named Simple Jack. The DreamWorks film, which opens Wednesday, also stars Robert Downey Jr. and Jack Black.

"When I heard about it, I felt really hurt inside," said Special Olympics global messenger Dustin Plunkett. "I cannot believe a writer could write something like that. It's the not the way that we want to be portrayed. We have feelings. We don't like the word retard. We are people. We're just like any other people out there. We want to be ourselves and not be discriminated against."

Andrew J. Imparato, president of the American Association of People with Disabilities, said he and other representatives from advocacy groups representing the mentally disabled met with DreamWorks co-chair Stacey Snider and watched a private screening of the film Monday morning. Imparato called the movie "tasteless" and said it was "offensive start to finish."

"I have a sense of humor," said Imparato. "There were parts of the movie where I laughed, but it seems to me that the movie tried really hard to go too far and then pull back on everything that was offensive except the issue of people with intellectual disabilities. I just think Ben Stiller and the people involved in this movie just didn't think it was going to be offensive."

Following the original complaints from the advocacy groups, DreamWorks pulled some promotional materials, including a Web site that promoted the film-within-a-film starring Stiller's character which contained the tag line "Once there was a retard."

Dreamworks said it doesn't plan to make any changes to the film, Tracy reports. In a statement, it said "Tropic Thunder" is "an R-rated comedy that satirizes Hollywood and its excesses, and makes its point by featuring inappropriate and over-the-top characters in ridiculous situations."

"If you want to pick on people, as the old playground saying goes, pick on people your own size," said Timothy Shriver, chairman of the Special Olympics, who is calling for a boycott of "Tropic Thunder" along with the other groups. "This population struggles too much with the basics to have to struggle against Hollywood. We're sending a message that this hate speech is no longer acceptable."