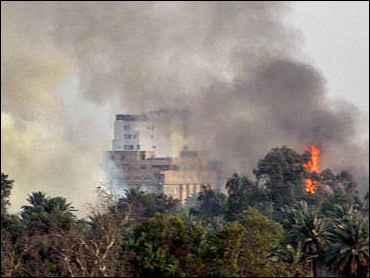 The U.S. military on Wednesday accused fighters loyal to a rebel cleric of firing on American forces from one of Shia Islam's holiest shrines. Seven militiamen were killed in fighting in the center of Karbala, hospital officials said.

Separately, a group linked to al Qaeda claimed responsibility for Monday's car bomb assassination of the Iraqi Governing Council president in a statement posted on a militant Islamic Web site.

The head of the Monotheism and Jihad Group is believed to be Abu Musab al-Zarqawi, a Jordanian wanted by the United States in connection with numerous terrorist attacks. He is suspected of strong links to Osama bin Laden's network. It was the second group to claim responsibility.