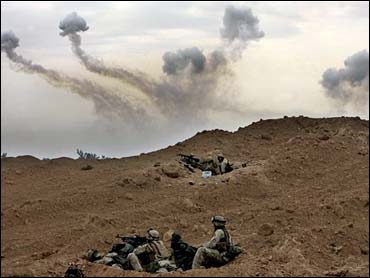 Backed by a barrage from warplanes and artillery, American troops fought their way into the western outskirts of Fallujah on Monday, seizing a hospital and two bridges over the Euphrates River in the first stage of a major assault on the insurgent stronghold.

The U.S. military reported its first casualties of the offensive — two Marines killed when their bulldozer flipped over into the Euphrates. A military spokesman estimated that 42 insurgents were killed across Fallujah in the opening round of attacks.

Four foreigners, including two Moroccans and two unidentified people, were captured when U.S. and Iraqi forces swept into the first objective: Fallujah's main hospital, which the military and Iraqi Prime Minister Ayad Allawi said was under insurgent control.

Allawi said he had given the green light for international and Iraqi forces to launch the long-awaited offensive against Fallujah, considered the strongest bastion of Iraq's Sunni insurgents. "We are determined to clean Fallujah of terrorists," he said.

Doctors in Fallujah reported 10 people killed and 11 wounded during the bombardment overnight.