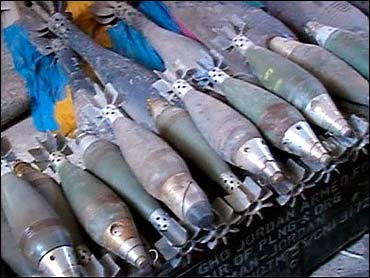 Leading Sunni Muslim politicians Thursday urged postponement of the Jan. 30 national elections, and a senior official said the government had agreed to meet outside the country with Saddam Hussein supporters to try to convince them to abandon the insurgency.
Elsewhere, U.S. troops said they had uncovered the largest weapons cache to date in Fallujah, where Iraqi officials said more than 2,000 people died in the weeklong U.S.-led offensive aimed at curbing the insurgency so that elections could be held nationwide.

The Fallujah siege angered many in the influential Sunni minority, producing calls to boycott the ballot, a move that could cost the new government much-needed legitimacy.

Sunni politician Adnan Pachachi, a former foreign minister and a member of the Iraqi National Council, said delaying the ballot by three months or more would enable political leaders to convince Sunni clerics and others to abandon their boycott call.

"I think that it will not be in the interest of anyone to let large segments of the Iraqi population be completely left out of the political process," Pachachi, leader of the Independent Democrats party, told The Associated Press.

Seven other Sunni parties also demanded a delay in the election, saying they want guarantees that they won't be marginalized in any new government expected to be dominated by rival Shiites.

In a bid toward drawing Sunni support, Foreign Minister Hoshyar Zebari said an Iraqi delegation would meet in Amman, Jordan, with "a number of political opposition movements," including some former Saddam supporters on the "most wanted list," to convince them to abandon the insurgency and take part in the election.

No date for the meeting with former Baath Party figures was announced, and Zebari did not say who would attend, although he ruled out contacts with "terrorists."

It appeared the contacts, which he said were encouraged by Arab governments, were aimed at trying to strike a deal with "nationalist" opposition groups and dividing them from religious extremists such as al-Qaida-linked terror boss Abu Musab al-Zarqawi, a Jordanian.

Pachachi said if many Sunnis boycott the elections, the result would be an "illegitimate" parliament with "no guarantee that the security situation will improve."

Iraq's Shiite clerical hierarchy, led by Grand Ayatollah Ali al-Sistani, has demanded the election be held as scheduled. However, Lebanon's most senior Shiite cleric also voiced doubts Thursday about the feasibility of a January ballot because of Sunni objections.

"There is a big group on the sectarian and political levels who oppose and will boycott the elections. Therefore, the elections will not represent all sections of the Iraqi people," Grand Ayatollah Mohammed Hussein Fadlallah, an Iraqi-born Lebanese, said in an interview in Beirut.

Nevertheless, the government is pressing ahead with plans for the balloting, the first since the April 2003 collapse of Saddam's regime. Iraq's electoral commission extended until next Thursday the deadline for registering political parties in the insurgent-riddled provinces of Salaheddin, Anbar and Mosul to give local politicians time to meet the registration requirement.

The weapons cache, described by the U.S. military as the largest uncovered so far in Fallujah, was discovered Wednesday in the Saad Bin Abi Waqas Mosque, where fugitive rebel leader Abdullah al-Janabi often preached.

U.S. forces also uncovered what may have been a mobile bomb-making factory as well as mortars, rocket-propelled grenades, launchers, and parts of surface-to-air weapons systems elsewhere in the mosque compound, the military added.

At press conference in Baghdad, National Security Adviser Qassem Dawoud said troops found the suspected chemical lab in the southwestern district of Fallujah, where pockets of insurgents are still holding out following the Nov. 8 U.S.-Iraqi assault.

"We also found in the laboratory manuals and instructions spelling out procedures for making explosives," he said. "They also spoke about making anthrax."

Dawoud showed pictures of a shelf containing what he said were various chemicals about two dozen glass and plastic bottles as well as plastic sacks full of some powdered substance labeled in Arabic potassium cyanide. One of the pictures showed a line of plastic-covered computer terminals and chairs in a row.

Dawoud also said a key aide of al-Zarqawi, who was believed to have been based in Fallujah, had been arrested in Mosul, where insurgents rose up this month in support of the Fallujah fighters.

Dawoud identified him only as Abu Saeed and did not say whether he had fled Fallujah. The Iraqi official said the death toll for the entire Fallujah operation stood at more than 2,085, although he gave no breakdown. About 54 U.S. troops were among those killed.

In the southern city of Basra, police said Thursday they had arrested five Arab foreign fighters who escaped from Fallujah with plans to attack coalition troops and Iraqi police in the south.

The five two Saudis, two Tunisians and a Libyan, were arrested Wednesday night at a checkpoint north of Basra, police said.

With resistance in Fallujah nearly ended, some 5,000 U.S., British and Iraqi forces have turned their sights on insurgent strongholds just south of Baghdad. U.S. officials said 81 suspected rebels were wounded up early Thursday in raids around Youssifiyeh.

About 116 suspects have been detained since the offensive, codenamed "Operation Plymouth Rock," began Tuesday, the military said.