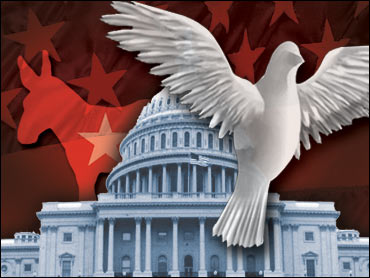 This column was written by Matthew Yglesias


"Can the Democratic Party become fully competitive?" asked New York Times guest columnist Thomas Edsall on Saturday, or "is American liberalism dead, the 2006 election a last twitch of life before rigor mortis sets in?" According to Edsall, "the answer to both questions is yes," but "for the Democratic Party to revive, major tenets of American liberalism, economic and sociocultural will have to be discarded."

In particular, says Edsall, to remain competitive, liberals will need to stop pushing the interests of labor unions, racial minorities, feminists, and gays and instead focus on "the broader public interest." The broader public, in this instance, apparently composed entirely of fairly prosperous straight white men. "Only two members of the House leadership are," according to Edsall, "intuitively attuned" to this vital need for liberalism to set aside its concern for under-privileged groups — Rahm Emanuel and Steny Hoyer.

The notion that the Democratic Party is in some state of electoral crisis requiring radical revisions of existing doctrine has almost no evidence on its behalf. Democrats made gains in congressional elections in 1996, 1998, and 2000. They won popular pluralities in presidential elections in 1992, 1996, and 2000. They won a sweeping congressional victory in 2006. Their political problems in recent decades consist entirely of poor ballot design in the state of Florida and the two post-9/11 elections of 2002 and 2004. The resurgence of public concern with national security issues after the catastrophic terror attacks of September 11, 2001 was a serious political challenge for a party that had been bedeviled by the politics of security ever since the mid-1960s or so.

It was a challenge that the party met very poorly. Soon after the attacks, the Bush administration began moving toward an invasion of Iraq. A timid Democratic Party leadership, given cover by a surprisingly large band of "liberal hawk" intellectuals, chose to go along for the ride. Dubious intelligence claims and dubious strategic assumptions were not seriously challenged by the relevant congressional figures (Carl Levin, top Democrat on the Senate Armed Services Committee is an honorable exception here — but a rare one) or the leading presidential candidates. This was supposed to save Democrats' skin in the '02 midterms, but it didn't work. It also ensured that when the war was clearly going poorly in 2004, the party was ill-positioned to take advantage of it.

By 2006, things had changed. Nancy Pelosi, an Iraq dove from the beginning, was in charge of the House Democrats. Howard Dean was installed as Chair of the Democratic National Committee. Senate leader Harry Reid, Ike Skelton and John Murtha, the top House Democrats on defense issues, had defected to the dove camp. "Moderate" Republicans who'd backed the war went down to defeat all across the Northeast and in many parts of the Midwest. Strong candidates like Jim Webb and John Tester divorced a hard-headed anti-war message from countercultural associations and won in Virginia and Montana.

It was, in short, a triumph of the doves.

This came about less because of any brilliant political insights, than simply through the fact that on some level it helps to be right on issues of war and peace. A "tough" posture on security is a good thing to have, but not if it leads you to back military adventures that are obviously failing. To a first approximation "avoid supporting things that turn out terribly" is an excellent starting point for the politics of national security.

Under the circumstances, the number of people arguing on behalf of a rear-guard holding action by the dwindling ranks of Democratic hawks is truly remarkable. Somehow, the conventional wisdom has become that Emanuel and Hoyer are the keys to Democratic political success and that it's vitally important for the hawkish Jane Harman to run the House Intelligence Committee. James Carville was seen arguing loudly that the Democrats should take the unprecedented step of booting Dean from his DNC Chairmanship in the wake of a win. Hillary Clinton, somewhat astoundingly, continues to be the frontrunner for the 2008 nomination and all eyes are turning to James Baker's Iraq Study Group. This outfit's avoided organizers experts with extreme views on either side of the Iraq war debate" even though in this instance the "extreme" left view — that the war was a mistake and we should stop fighting it — has majority support.

All told, it looks like a remarkable effort to snatch defeat from the jaws of victory; to take power out of the hands of the people who were right on the leading issue of our time and put it back in the hands of those who were wrong, both substantively and politically. That's crazy, but it's what's going to happen unless liberals get serious about national security policy. Not "serious" in the Beltway sense of "inclined to favor starting wars" but actually serious about waging and winning these intra-party battles instead of letting the hawks drive the bus off the cliff and then starting to fight back.