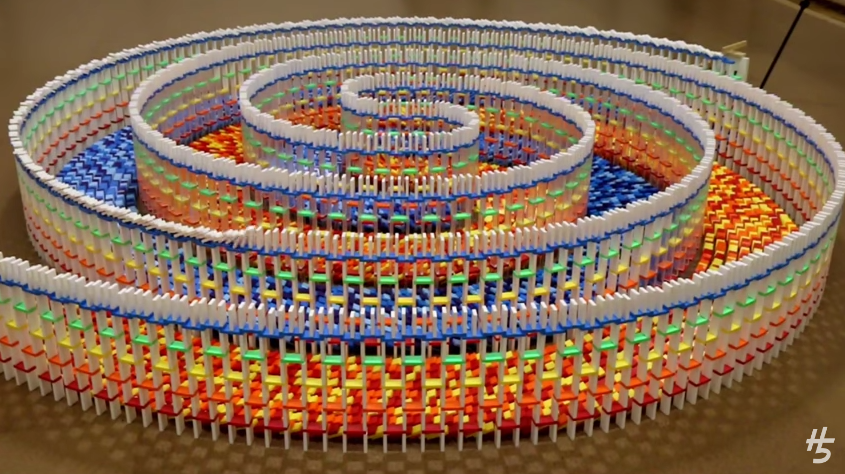 At age 10, Lily Hevesh was given her first 28-pack of dominoes from her grandparents.

Not only does she enjoy setting up and knocking down dominoes as a hobby, but it has become her full-time job.

“I like to watch them fall,” Hevesh told CBS News.

And she’s not alone. She started posting videos of her colorful projects on YouTube and now has more than 865,000 subscribers. Her videos garner millions of views.

In fact, more than 5.5 million people have already watched the video she posted just two days ago – called “The Amazing Triple Spiral.”

It took 15,000 dominoes and 25 hours of concentration to make her vision come to life.

“It’s a lot of hard concentration, but I don’t mind it,” Hevesh said. “I like building.”

Hevesh said she completed a similar – much smaller – design in 2011. It took time to plan one that was even bigger and brighter than the first.

But with millions of views and thousands of comments online, Hevesh is confident her time was well spent.

Every Saturday, the YouTube star posts news videos of her designs.

She shares personal projects and other pieces she’s designed for museums, ad agencies and companies.

Though she knows this won’t be a profession for many, she encourages others to try their hand at dominoes. When one row falls, pick it back up.

“You just have to have the determination and persistence to restart and keep going,” she said. “Take it slow, be very cautious when you’re building, and if it falls down, know that it’s part of the domino process.”