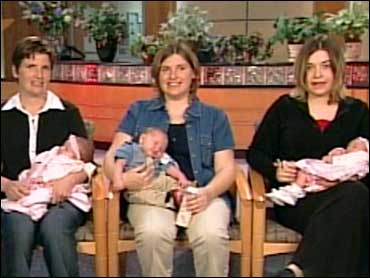 Three sisters from Huntington, Ind., have a lot of joy to share. Each of them had a baby last month, and they delivered on consecutive days.

Tammy Kratz, Tina Crago, and Kathie Covey talked to The Early Show co-anchor Rene Syler about their pregnancies and their bundles of joy.

Tammy was the first to deliver, followed by Kathie and then Tina. Tammy's daughter, Kiele, was born on March 25; Kathie's daughter, Jada, on March 26, and Tina's son, Ethan, on March 27.

The very next day, Tina's suspicious were confirmed. She says, "Tammy had stopped by after work and I told her that I was pregnant." Tammy's response was that she was pregnant also.

Their parents found out at different times and were quite excited, the sisters say.

The delivery was a chain reaction. Tina and Tammy had planned to be Kathie's coaches the day Kathie was supposed to be induced, but when they got to the hospital, Tammy started having labor pains.

Tina recalls, "Tammy had gone in with minor complications and they ended up doing an emergency C-section on her."

Kathie points out Tammy was supposed to have a C-section on Friday, so Kathie went home and took Tammy's appointment. "I got induced the next day," Kathie says. And just as Kathy was being induced, Tina started having contractions. "I said, 'No way am I leaving again without a baby in my hands,'" Kathie recalls. But she got induced and had her first baby.

Tina's baby came the following day; he was 9 pounds 3 ounces. She had the biggest baby, Kathie notes. Tina now has three children, and Tammy has five.

The sisters say it was just a coincidence that they were pregnant at the same time. Asked if they will try to repeat this feat in a year or two, they answered "NO!" in unison.