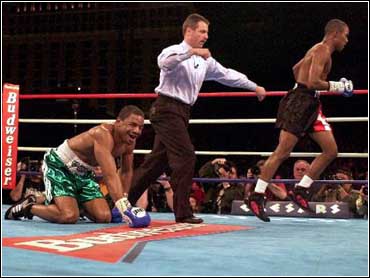 Felix Trinidad Jr. got hot in the second half of the fight on a cool desert night and won the WBA super welterweight championship on a one-sided decision over David Reid.

The IBF-WBC welterweight champion from Puerto Rico was knocked down in the third round Friday night outdoors at Caesars Palace and had trouble getting through Reid's defense.

Trinidad took control of the fight, knocking down Reid in the seventh round, ripping a cut over his right eye in the eighth and knocking him down three times in the 11th.

Trinidad was just too experienced for Reid, who lost for the first time in his 15-fight professional career.

"Experience in the later rounds was a telling point," Reid said. "I kind of felt experience played a factor. I should have been hitting him with more punches."

Reid used his speed to his advantage in the first half of the fight but by the end his legs could barely keep him up, even when he wasn't being hit.

"If you don't get me in the first few rounds, the fight is over," Trinidad said.

For a brief moment, it looked like Reid would do just that.

Reid, the 1996 Olympic 156-pound champion, brought many in the crowd of 10,000 on a 60-degree night to their feet in the third round when he knocked down Trinidad with a right to the head. Trinidad went to a knee and got up quickly.

"I never got discouraged after the knockdown and the point was taken away," Trinidad said. "It made me focus more."

Trinidad was penalized two points for low blows, one in the sixth and once in the 11th. Reid, too, was penalized a point for a low blow in the ninth.

Reid led 57-55 on all three official cards after six rounds. Then Trinidad turned the fight into a mismatch.

Trinidad, 27, started his victory march in the seventh round when he knocked Reid down with about 20 seconds left with a left-right-left to the head. Reid staggered against the ropes, then went down. He got up quickly and survived a flurry by Trinidad just before the bell.

"I wasn't going to quit," Reid said. "I was a little hurt. Trinidad was a better man tonight."

Trinidad, who like Reid weighed 153, indicated after the fight he would relinquish the WBC and IBF welterweight titles and remain a super welterweight.

"I plan to move up in weight slowly, up to 160 (middleweight)," Trinidad said.

Trinidad defended the IBF 47-pound title and won the WBC title in his previous fight on a majority decision over Oscar De La Hoya.

There has been talk about a Trinidad-De La Hoya rematch but Trinidad said, "I would love to fight him but he's fighting (Shane) Mosley and I don't care if I ever fight him."