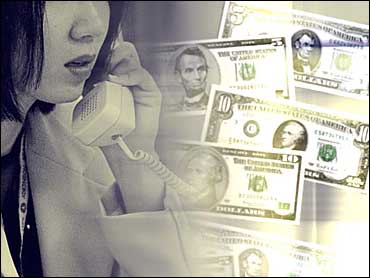 If you don't know how to protect yourself, you could end up paying hand over fist for fees hidden in your bills. Financial adviser Ray Martin joins The Saturday Early Show with some helpful tips.

From your credit-card bill to that text message you just sent, hidden fees are lurking everywhere. If you aren't on the lookout, those costs can add up fast.

Consumer Reports estimates that U.S. consumers collectively pay at least $216 billion in financial fees each year. That works out to about $750 a person in miscellaneous fees. Your cell phone bill and your Internet service provider may slap on some hidden fees, but the biggest culprit is credit cards. Americans pay an estimated $31 billion a year in credit-card fees. Here's what you need to watch out for:

The instant you are late, card issuers typically impose a late fee of $15 to $39. If you're already close to your credit limit, a late fee can push you over the top — and then the bank may charge you a comparable over-the-limit fee. Your low interest rate may also get hiked up to as much as 24 percent if your payment is late. Credit-card companies set specific times for their deadlines, not only specific dates. So if you do wait until the last day to pay, your fate hangs in the balance of a mailman, or slow Internet service. Your best bet is to stay organized with your finances and pay beforehand, or call the company and arrange a deadline that's right for you, like the day after you receive a paycheck.

Getting charged — even though you paid on time

Many cardholder agreements allow the issuer to raise your interest rate if you pay any other creditor's bill late. Nearly 40 percent of card issuers say they regularly exercise these rights, according to the Institute for Consumer Financial Education, a San Diego nonprofit. No matter what, write your check for at least the minimum monthly payment due and mail it as soon as your credit-card bill arrives to avoid late penalties. Better yet, pay your bills online and set up an automatic payment to meet the minimum on your credit card each month.

Getting charged when you never even charged

Influenced by the high currency conversion rates, some cardholders decide not to bring their plastic on vacation with them. This is not a bad idea, but if you're abroad for a long period of time, or even if you're at home and haven't used the card in a while, yet another fee can be dropped on you. The cost is around $15 at most institutions for customers who haven't swiped their cards in six months, though charges can be incurred at shorter intervals as well. Be aware of such practices, and use your card for a small purchase just to prolong the fee payment, if need be.
Are credit cards a necessary evil? If you're feeling overwhelmed and somewhat disgusted by the many ways a card issuer can collect from its customers, consider whether having a card is worth the time and expense.

You sign a contract for a proposed amount, and all of a sudden your bill jumps 10 percent. Verizon calls the additional charge a Supplier Federal Universal Service Fund (FUSF) Recovery Fee. Other telecommunications companies call it other names, such as FUSF Pass-Through Fee or Federal Programs Cost Recovery Fee. Federal regulations require the big telecommunications suppliers to contribute funds to the Federal Universal Service Fund to defray costs of increasing Internet access at libraries and other public places and of advancing online availability to low-income and rural Internet users. The amount is set quarterly by the Federal Communications Commission. By law, those suppliers are allowed to pass along the charges to service providers, such as Verizon Online and other DSL companies. Many of those broadband providers are now charging their customers the fees as separate line items in their bills. Customers often mistake them for "some sort of federal tax," as one online complaint put it. They're not. And the feds do not require DSL providers to charge their customers the fee as they do taxes.

Is the bill from your cell starting to swell?

Since January 2002, wireless providers have charged their customers nearly $1 billion in additional fees, purportedly to pay for federally mandated programs like phone number portability and emergency 911 locator services for cell phones. That's according to the Center for Public Integrity, which is tracking the trend. Wireless carriers had pocketed $629 million by October 2003, when the center first documented the trend, the Center for Public Integrity said. Since then, monthly charges have increased, the center said, for a total of $937 million collected by April 2004. As a whole, carriers are now charging their users $94 million a month, the center said.
Consumers have limited leeway to avoid these charges. By the time they discover the fees, they're usually locked into a one- to two-year contract and can't escape without paying an early termination fee of $150 to $200. This month, the cost of T-Mobile's wireless text-messaging service increased to 10 cents per message. It used to be a nickel.

Providers of online and software tax preparation and filing services, such as TurboTax and TaxCut, charge a fee to individuals who use their software and then elect to file their tax returns electronically. These e-file fees are typically $15 to $30 to file a federal and state tax return, though many taxpayers can use these programs and e-file their tax returns for free using the IRS Free File program, which is designed to be available to about 70 percent of all taxpayers. To add insult to injury, at least one provider, TurboTax, will also ask the taxpayer if they want to have e-file fees deducted from the refund — and if this option is selected, it charges a fee of approximately $15 to do so. Yes, that's right — they charge a fee to have their fee deducted from your refund. It's a fee on a fee!

How Safe Are Roller Coasters?