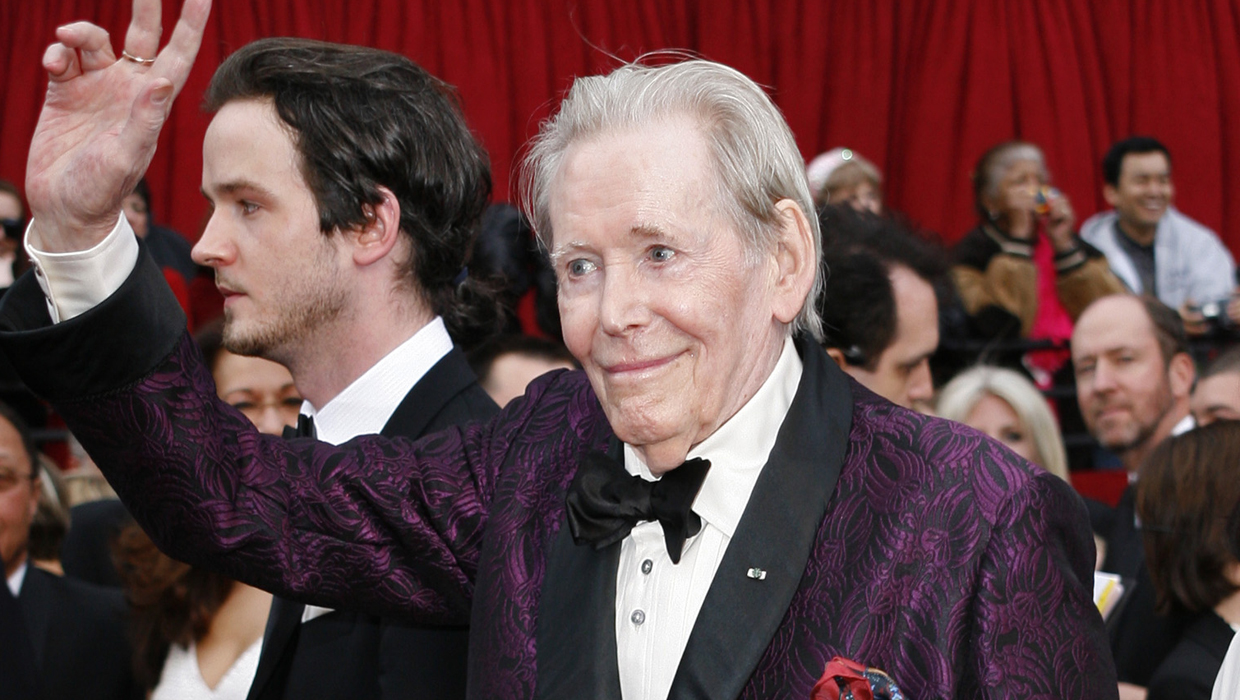 "There won't be any more like that, will there?" said 73-year-old actor Michael Gambon, who played Dumbledore in several "Harry Potter" films.

O'Toole, the 81-year-old star of "Lawrence of Arabia," died Saturday in London. Britain's prime minister and Ireland's president were among the many expressing condolences.

Irish President Michael D. Higgins said O'Toole had been "unsurpassed for the grace he brought to every performance."

O'Toole was nominated eight times for an Academy Award without winning -- a record. He was awarded an honorary Oscar in 2003.

Nick James, editor of film magazine Sight & Sound, said O'Toole was "an actor with a kind of bohemian quality to him which has kind of passed on -- largely to do with health and safety concerns on movie sets."

"You're not allowed to behave that way anymore," James said. "You don't get hell-raisers anymore because you can't get them insured."

O'Toole had long suffered from ill health, his famously handsome face eroded by years of prodigious drinking. He gave up alcohol in 1975 following serious health problems and major surgery, but was unrepentant about his life of excess.

"If you can't do something willingly and joyfully, then don't do it," he once said. "If you give up drinking, don't go moaning about it; go back on the bottle. Do. As. Thou. Wilt."

James said O'Toole's career "was intrinsic to the times he lived in, the milieu he moved in."

"I don't think he would have wanted it any other way. The arts have always dallied with the dark side in order to feed creativity."

Seamus Peter O'Toole was born Aug. 2, 1932, the son of Irish bookie Patrick "Spats" O'Toole and his wife Constance. There is some question about whether Peter was born in Connemara, Ireland, or in Leeds, northern England, where he grew up, but he maintained close links to Ireland.

After a teenage foray into journalism at the Yorkshire Evening Post and national military service with the navy, a young O'Toole auditioned for the Royal Academy of Dramatic Art and won a scholarship.

He went from there to the Bristol Old Vic, where his 1955 "Hamlet" was acclaimed, and was soon recognized as one of the most exciting young talents on the British stage.

International stardom came in David Lean's epic "Lawrence of Arabia." With only a few minor cinema roles behind him, O'Toole was unknown to most moviegoers when they first saw him as T.E. Lawrence, the British World War I soldier and scholar who led an Arab rebellion against the Turks.

His sensitive portrayal of Lawrence's complex character garnered O'Toole his first Oscar nomination, and the spectacularly photographed desert epic remains his best known role. O'Toole was tall, fair and strikingly handsome, and the image of his bright blue eyes peering out of an Arab headdress in Lean's film was unforgettable.

Playwright Noel Coward once said that if O'Toole had been any prettier, they would have had to call the movie "Florence of Arabia."

Further Oscar nominations followed for "Becket"; "The Lion in Winter"; "Goodbye, Mr. Chips"; "The Ruling Class"; "The Stunt Man" and "My Favorite Year."

He almost turned down the honorary Oscar in 2003. Hoping another Oscar-worthy role would come his way, O'Toole wrote: "I am still in the game and might win the bugger outright."

O'Toole's later stage career was patchy. The 1980 "Macbeth" in which he starred was a critical disaster of heroic proportions. But it played to sellout audiences, largely because the savaging by the critics brought out the curiosity seekers.

"The thought of it makes my nose bleed," he said years later.

In 1989, however, O'Toole had a big stage success with "Jeffrey Bernard is Unwell," a comedy about his old drinking buddy, the legendary layabout and ladies' man who wrote The Spectator magazine's weekly "Low Life" column when he was sober enough to do so.

A month before his 80th birthday in 2012, O'Toole announced his retirement from a career that he said had fulfilled him emotionally and financially, bringing "me together with fine people, good companions with whom I've shared the inevitable lot of all actors: flops and hits."

"However, it's my belief that one should decide for oneself when it is time to end one's stay," he said. "So I bid the profession a dry-eyed and profoundly grateful farewell."

O'Toole's marriage to Welsh actress Sian Phillips ended in divorce in 1979, after 19 years of marriage. The couple had two daughters, Kate and Pat.

A brief relationship with American model Karen Somerville led to the birth of his son Lorcan in 1983.

His daughter Kate said the family had been overwhelmed by expressions of sympathy.

"In due course there will be a memorial filled with song and good cheer, as he would have wished," she said in a statement.