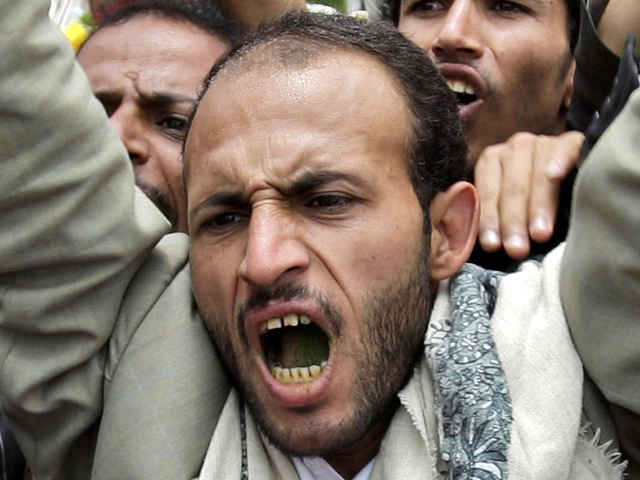 The fight — led the Yemen's largest tribe — poses the most significant challenge to Saleh's rule after three months of street demonstrations and failed Arab mediation to ease him from office. Yemen's tribes command well-armed militias and can tap into traditional clan-based loyalties to possibly tip the scales against Saleh's 32-year rule.

Under Yemen's ancient codes, tribal leaders can declare that members follow their orders above all others. This potentially gives tribal chiefs the power to order government soldiers from their clans to stand down.

There were no apparent signals of mass defections from Saleh's military. But some key commanders have jumped to the opposition, and the leader of Yemen's largest tribe, Sheik Sadeq al-Ahmar, warned that Saleh had the option to step down or be held accountable for "dragging the country to a civil war."

The battles broke out Monday after an attempt by government forces to storm al-Ahmar's compound in the heart of the capital Sanaa. By Thursday, the clashes had widened to include areas around Sanaa's airport. At least 109 people have been killed, including at least 28 on Thursday amid differing accounts on the blasts.

Yemen's government said it was an explosion at a weapons storage site. The opposition claimed military forces shelled a building used by tribal fighters loyal to al-Ahmar and other major tribes who have joined him.

The escalating violence prompted the State Department on Wednesday to order nonessential U.S. diplomats and their families to leave the country.

Al-Ahmar's tribe, called the Hashid, turned against Saleh two months ago, but had kept its militia on the sidelines. The current fighting, however, showed that the tribal fighters can hold their own against Saleh's troops.

Al-Ahmar's forces have laid siege to at least nine government ministries and government troops have responded with mortars and shelling. The targets Thursday included a TV station owned by al-Ahmar, which was forced off the air by the attack.

Speaking to The Associated Press over the phone from his compound, al-Ahmar urged neighboring Gulf countries and other nations to boost pressure on Saleh to leave power. He also offered a cease-fire if Saleh takes the first steps to halt the attacks.

But Yemeni authorities responded by escalating their campaign against al-Ahmar with arrest warrants issued against him and other tribal leaders, who represent the country's second- and third-largest clans.

It could be a risky gambit. In total, al-Ahmar and his allies have tribal links to more than half the military and security forces. They would face a difficult test if tribal leaders invoked the traditional code of "nakf," or "the call" in local dialect, which means to set aside other allegiances and follow the tribe's decisions.

"He is the one who started this war. They attacked us on our houses. We didn't start it," said al-Ahmar. "This man doesn't want anything good for Yemen."

Al-Ahmar also claimed Saleh intentionally triggered the current bloodshed in an attempt to portray his regime as the only option to avoid chaos.

"He wants to explode the situation," al-Ahmar said. "He is sending a message to the world: `Look, if I leave this is the kind of war that will take place."'

But Saleh has struck a tone of hard-line defiance.

On Wednesday, he vowed he would not step down or allow Yemen to become a "failed state" and haven for al Qaeda.

Saleh also threatened that his ouster could turn Yemen into a haven for al Qaeda — directly touching on U.S. fears that chaos in Yemen could open room for more terrorist footholds. The Yemeni branch of al Qaeda is linked to the attempted Christmas Day 2009 bombing of an airline over Detroit and explosives found in parcels intercepted last year in Dubai and Britain.

"Yemen will not be a failed state. It will not turn to al Qaeda refuge," the statement said. Saleh also said he would work to prevent the recent violence from "dragging the country into a civil war."

U.S. President Barack Obama has called on Saleh to transfer power — a change from an administration that once considered the Yemeni ruler a necessary ally against terrorism. On Thursday, U.S. Secretary of State Hillary Rodham Clinton said Saleh has repeatedly "reneged" on promises to step down, and the U.S. and other countries were trying hard to get him out.

In Washington, a State Department advisory warned the clashes in Yemen's capital "may escalate without notice."

"The security threat level in Yemen is extremely high due to terrorist activities and civil unrest," the advisory said. "There is ongoing civil unrest throughout the country and large-scale protests in major cities."

The clashes have forced hundreds of Yemenis to flee Sanaa or take refuge in basements to escape mortar strikes.

Hundreds of protesters, meanwhile, camped outside the university in Sanaa, protected by soldiers who have defected to the opposition side.