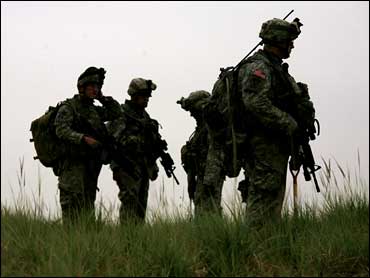 This story was written by CBS News correspondent Mark Strassmann

Iraq's "Triangle of Death" is one of the last places on earth you want to be if you're an American in trouble. It's southwest of Baghdad, and much of it looks more like Vietnam than Iraq: It's a river area, lush and green with farm fields and palm trees.

But even by Iraq's horrific standards, it's an especially lethal area dominated by Sunni insurgents. Through their terror campaign of murder, rapes and kidnappings, they've cowed most residents. America has few friends there — and most of those we do have keep it quiet. Self-preservation is a powerful silencer.

Yet this is where a massive dragnet is now trying to find three missing U.S. soldiers. They were parked in a pair of Humvees, essentially an observation post looking for trouble. Then trouble found them.

In a pre-dawn raid, a group of insurgents ambushed them. Five soldiers in the Humvees were killed, four Americans and one Iraqi Army translator. By the time other U.S. soldiers arrived almost an hour after hearing the explosions — slowed by roadside bombs en route — the three remaining U.S. soldiers had vanished. There are signs at the scene that suggest they were dragged into cars and taken somewhere, but no one knows what kind of shape they were in, then or now — no one, except their attackers.

"These are somebody's friends. Somebody's brother. We want to get them back as bad as their families want them back," said Sgt. Greg Woodruff.

He's one of thousands of American and Iraqi soldiers now searching a 200-square mile area for some sign of the missing soldiers. One of the four tenets of the "Solder's Creed" is to never leave behind a fallen comrade. Like all American soldiers, Johnson and his platoon take that creed seriously, especially now.

The three missing soldiers were from their brigade with the 10th Mountain Division, headquartered at Fort Drum in upstate New York.

I caught up with this platoon as they searched a little farming town of Rushdi Mullah. It's all dirt roads and dirt poor; 300 people living off the land as best they can. Some of them watched us curiously: old men and women, some mothers, and lots of kids.

They responded to waves and said hello. But even though this town sits barely two miles from where the ambush happened, no one living here has come forward with a solid tip or a lead. Most of them are too scared. They think that whenever this search ends, and the U.S. soldiers leave, residents will be left alone again with al Qaeda — which has no use for anyone who cooperates with Americans.

So this platoon, like so many others in the search zone, keeps looking for the big break —something to end the anguish of not knowing for everyone involved, especially the families of the missing. These soldiers still have hope for a happy ending, but they're also realists.

They know the history of gruesome endings for captured U.S. soldiers here. Each fruitless day that goes by in this search reinforces the sense that at best, this is a long shot.

"You can't let emotions get involved. But I'd be lying to you if I didn't say this affects me emotionally," Col. Mike Kershaw, the brigade's commander, said. He's pure Texan, something of a larger-than-life action figure, in constant motion. He needs all his energy this time.

In his military career, Kershaw has been on missions to recover soldiers before. But this time is different. These are his soldiers. "I'm responsible," Kershaw said. "I'm accountable to these soldiers' families."

As I walked with Woodruff through Rushi Mullah, occasionally passing scrawny livestock walking on its dusty streets, I asked him what has to happen to bring the soldiers home safely. He said, "Locals will help us. And al Qaeda will have some honor and not do anything to our guys."

That's not much of a one-two combination for Johnson to pin his hopes. But in the Triangle of Death these days, everyone clings to hope wherever he can find it.