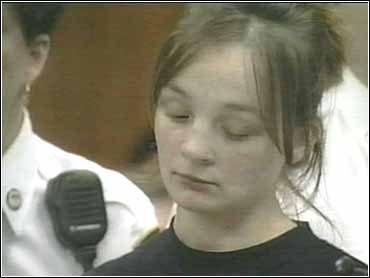 Even amid all the sorrow last winter, there were legal proceedings. But was there someone to blame for the fire? Correspondent Bill Lagattuta reports.

The homeless couple that the firefighters had searched for ended up being charged with six counts of manslaughter: drifter Tom Levesque, then 37, and his companion, Julie Ann Barnes, who was 19 and three months pregnant.

They had been living illegally in the vacant warehouse for months and a dropped candle ignited clothes and started the blaze.

The police say the pair not only failed to put out the fire, they failed to report it. Said Police Chief Edward Gardella: "Certainly we believe that they should have been aware enough to notify somebody that there was a fire there."

Instead they had listened to music at a nearby mall; a store manager overheard them arguing. They then went to have dinner at a food kitchen, and then they went their separate ways. He stayed overnight in a friend's apartment; she stayed with a friend in a hotel room, and watched the fire from a fourth-floor window.

"If we can establish that arson occurred, then maybe a more appropriate charge could be murder," Gardella said.

But while Barnes and Levesque were being held in prison on high bail waiting trial, miles away in Maine, Tim King got a paper two weeks after the fire, with coverage of the story. He saw a photo of Barnes' troubled, bewildered face and noticed a resemblance.

"I looked at the picture of Julie and said, 'Gosh, she looks remarkably like my daughter Jennifer,'" he recalled.

Jennifer, then 16, is Tim and his wife Debb's adopted daughter.

"When I saw the picture, I knew immediately it was Jennifer's biological sister," Debb King said.

She had always known Jennifer had an older sister, Julie, and had met Julie when she adopted Jennifer in Worcester 13 years ago. Debb King also knew that the sisters shared a significant limitation:

"Jennifer is diagnosed as mentally retarded," Debb King said. "Most of her testing puts her at about a 7-, 8-year-old functioning level."

And Julie's condition was "similar to what I felt Jennifer's was, very shy, slow," Debb King explained.

But when the Kings adopted Jennifer, they felt they just couldn't take on two kids with special needs and Julie was left behind in foster care.

"But I never forgot about her ever," said Debb King. "I always wondered."

Did she sense that Julie's life was not anything close to her sister Jennifer's life?

Julie had been in and out of foster homes, and then joined a life on the streets.

In Maine, Jennifer grew up with love and support. She was a special education honor roll student. "She's just sweet. She looks for the good in everybody....She's just a beautiful, wonderful child," Debb King sad proudly.

The two sisters who have led strikingly different lives had the Kings wondering, "What if?"

"When you look at it and you realize that, oh my God, this could have been my daughter," Debb King mused.

Debb King didn't think that Barnes would have the wherewithal to realize that the warehouse was on fire, the seriousness of the blaze and that she needed to call the authorities. Debb King wanted to bring the other sister to Maine.

"I feel a real commitment," she said. "It's Jennifer's sister. And maybe we can give Julie the chance that she's hasn't had."

"It's the right thing to do," her husband said.

And so, after a meeting with Julie Barnes in prison, the Kings decided to work to get her out on bail and fight to get the charges dropped.

"This is a girl that's limited," Debb King acknowledged.

They planned to go to Massachusetts to speak to groups and raise money for bail. But in Worcester, where the wounds were still fresh, what they wanted for Julie Barnes would be a tough sell.

"We can understand a fire starting accidentally," said Jim Lyons, the father of one of the fallen firefighters. "However, we find it hard to understand that the fire department was not notified."

"We say to them that we have the utmost respect for them, for the families, for the firefighters, that we feel a tremendous sadness at their loss," Tim King responded. "But this tragedy doesn't need another victim."

Find out what a judge decided.