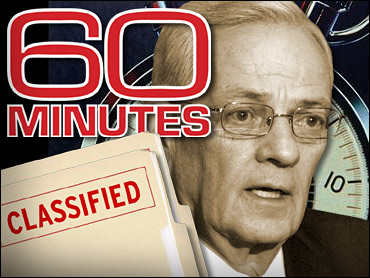 President George W. Bush on Monday ignored criticism of his policies and governing style by former Treasury Secretary Paul O'Neill, but his Treasury Department called for an investigation into documents taken by O'Neill and shown to CBS' 60 Minutes.

The Treasury Department said Monday that at least one document seen on the broadcast may have included classified "secret" material.

At President Bush's very first National Security Council meeting, O'Neill said, "there was a conviction, that Saddam Hussein was a bad person and that he needed to go."

"It was all about finding a way to do it. That was the tone of it. The president saying 'Go find me a way to do this,'" says O'Neill. O'Neill also claims to have seen no convincing evidence that Iraq hoarded weapons of mass destruction.

O'Neill is the main source for the book "The Price of Loyalty," written by former Wall Street Journal reporter Ron Suskind, to whom O'Neill provided 19,000 internal documents. O'Neill claims to have no financial interest in the book. [Simon and Schuster, the book's publisher, and CBSNews.com, are both units of Viacom.]

Suskind, who claims the National Security Council discussed an occupation of Iraq in January and February of 2001, tells 60 Minutes that O'Neill was given briefing materials labeled "Plan for post-Saddam Iraq."

President Bush, who justified the Iraq war partly by arguing the Sept. 11 attacks made preemptive attacks necessary, responded to O'Neill's claims on Monday.

"First let me say, I appreciate former Secretary O'Neill's service to our country," Mr. Bush said during a joint news conference with Mexican President Vicente Fox. "We worked together during some difficult times."

"Sept. 11 made me realize that America was no longer protected by oceans, and we had to take our threats very seriously no matter where they may be materializing," Mr. Bush said. "The stated policy of my administration towards Saddam Hussein was very clear.

"Like the previous administration, we were for regime change."

Presidential spokesman Scott McClellan would not confirm or deny that the White House began Iraq war planning early in Mr. Bush's term. But, he said, Saddam "was a threat to peace and stability before September 11th, and even more of a threat after September 11."

O'Neill was fired in December 2002 when Mr. Bush decided he needed a more forceful spokesman to push a new round of tax cuts through Congress.

"No one ever listened to the crazy things he said before, why should we start now?" said one.

O'Neill had publicly questioned the need for new tax cuts given signs that the economy was starting to rebound. He had also made several high-profile gaffes, including one that hurt the dollar in world markets, and been out of the country during two stock market plunges.

"It appears that the world according to Mr. O'Neill is more about trying to justify his own opinions than looking at the reality of the results we are achieving on behalf of the American people," McClellan said in Texas, where the president is staying at his ranch.

The official American government stance on Iraq, dating to the administration of President Clinton, was that the United States sought to oust Saddam.

But O'Neill said the Bush team's approach troubled him.

"For me, the notion of pre-emption, that the U.S. has the unilateral right to do whatever we decide to do, is a really huge leap," he said.

In an interview with Time magazine, O'Neill said he saw only "allegations and assertions" about Iraq's weapons programs during his tenure.

"To me there is a difference between real evidence and everything else. And I never saw anything in the intelligence that I would characterize as real evidence," he said.

A top U.S. administration official told Time that O'Neill was not in a position to have seen the intelligence on weapons of mass destruction because access to it was limited.

However, around the time O'Neill say the National Security Council began discussing Iraq in February 2001, Secretary of State Colin Powell told reporters that Saddam "has not developed any significant capability with respect to weapons of mass destruction."

On Feb. 16, 2001 — barely a month into the Bush presidency — U.S. and British planes launched significant air strikes on Iraq, claiming violations of the no-fly zone in southern Iraq.

Prime Minister Tony Blair's official spokesman, responding to O'Neill's claim, said Britain and the United States wanted to resolve the crisis in Iraq peacefully and were not intent on war.

Since the U.S. invaded Iraq last March, nearly 500 U.S. soldiers have died and no weapons of mass destruction have been reported found.

The Bush administration has never accused Saddam of a role in the Sept. 11 attacks, but has repeatedly suggested the attacks necessitated a new, more forceful foreign policy.

For example, last October, Mr. Bush told a crowd in New Hampshire: "America must not forget the lessons of September 11th … Our security requires constant vigilance and decisive action. I believe America has only one option: We must fight this war until the work is done."

"We're fighting on many fronts, and Iraq is now the central front," Mr. Bush said.