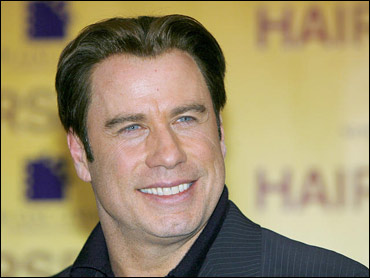 Pilot and actor John Travolta said Friday that he loves flying planes as much as making movies.

The 54-year-old spoke to reporters at the Experimental Aircraft Association's AirVenture, an annual aviation convention.

Travolta, who was 15 when he took his first flying lessons, said he earned his full pilot's license in 1978 and over the last 34 years has owned 17 different aircraft. He now owns a Boeing 707, Eclipse 500 and Gulf Stream II.

Travolta has been in numerous movies and was an Oscar nominee for "Saturday Night Fever" and "Pulp Fiction." He said he wouldn't have been able to do as much in aviation if it weren't for his film career.

"Aviation has always bailed me out of anything in my mind that is blue," Travolta said. "I can look through an airline schedule and brochure and cheer up."

Travolta flew his Boeing to the convention. His Eclipse was also there.

He lives on a fly-in community in Florida, where he parks his three planes at his home.

"That's how crazy I am about it. If I can look out the bedroom and see the planes, I am happy," he said. "I rest easy."

Travolta was promoting Eclipse Aviation, which was showing off fuel-efficient planes at the convention. Travolta is friends with founder Vern Raburn.

Harrison Ford also made an appearance Wednesday introducing his movie, "Indiana Jones and the Temple of Doom" at the convention's outdoor theater. Later Friday, Travolta was to introduce his movie "Broken Arrow," in which he portrays a U.S. Air Force pilot.

Travolta said he and celebrities like Ford promote aviation because fewer people are interested now than when he was a child. He said people can be inspired in many ways: by an air show, trip, book or a person.

"Maybe if John Travolta or Harrison Ford is interested in this, maybe it's something for me," Travolta said. "That's really the bigger purpose is to get the young people interested in aviation again and the aerospace industry."

He described those two as the "fabric of this planet."

He quit twice before finding an instructor who inspired him.

"When I quit the third time, he cried. I said, 'Wow he must care. I don't want to make him cry.' So the next day I soloed for his benefit, and of course it was ultimately for my benefit."

Travolta starred in the film version of "Hairspray" last year and has a voice part in the animated "Bolt," which is due out later this year, according to IMDb.com, an Internet movie database.