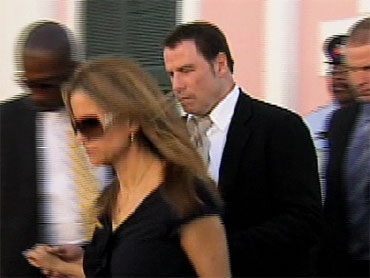 John Travolta has admitted for the first time his son Jett had autism. Travolta made the admission about his son in the Bahamas as he testified against two men accused of trying to blackmail him with private information about his son's rescue effort.

Jett died in January from a seizure.

CBS News correspondent Kelly Cobiella said Travolta testified in a Nassau courtroom that Jett suffered a seizure every five to ten days -- each lasting from 45 seconds to minutes.

Scientology watchers, Cobiella said, believe he may have kept the condition a secret because of the way Scientologists view illness.

"It's really a big deal, so how the Travoltas dealt with this--a chronic illness in the family, I'm not sure how they would have been able to explain it," Hines said.

The revelation in court breaks a long silence by Travolta. But does it signal a move away from the church?

Travolta finished his first day in court without testifying about the details of the extortion attempt.

However, he did testify that he performed CPR on his son after a nanny alerted him 16-year-old Jett had fallen ill at a family vacation home on Grand Bahama island.

"I ran downstairs with my wife to help my son," Travolta said.

Travolta is the star witness at the trial of two people -- paramedic Tarino Lightbourne and former Bahamas senator Pleasant Bridgewater -- who are accused of trying to extort $25 million from the movie star. Both defendants pleaded innocent to extortion charges at the trial that began Monday in this island chain off the Florida coast.

It was a rare public appearance for Travolta, 55, who has kept a low profile since Jett's death. He skipped promotional events this summer for his latest film, "The Taking of Pelham 1 2 3." He thanked his co-stars on his Web site for giving him time to grieve through their efforts to publicize the film.

Travolta arrived the Supreme Court building in an entourage of sport utility vehicles for his first appearance at the trial. Security was noticeably heavier than previous days with Bahamas police officers surrounding the courthouse.

In his testimony, he said he and Preston were awakened by a nanny around 10:15 a.m. on Jan. 2, the day of Jett's death. Travolta said when he went downstairs, another caretaker was doing chest compressions and he began administering breathing help.

Police say the alleged scheme involved a document related to Jett's treatment. It would have released emergency responders from liability if the family refused an ambulance but police said that did not happen.

A police officer testified Tuesday that Travolta signed the release because he initially wanted his son taken to the airport instead of a local hospital.

A nine-person jury was expected to hear from a total of 14 witnesses, including Travolta.