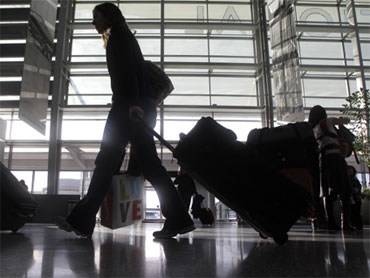 The holiday travel rush has begun, and AAA expects more Americans to travel for the holidays this year than last.

The AAA expects more than 92 million people planning to go more than 50 miles sometime between now and Jan. 2. More than 90 percent said they would be driving.

From all indications most of those on the move this week will be enjoying largely trouble-free trips, reports CBS News correspondent Dean Reynolds.

A Christmas Eve snow storm that blanketed parts of the Midwest was expected to bring rare Christmas Day snowfall to parts of the Southeast, prompting some airline flight cancellations and delays.

After dumping 9 inches of snow in Iowa by Friday morning, the storm was predicted to dip south into Tennessee and Georgia on Saturday, then move north Sunday. Winter weather advisories were in effect from Kansas east to Kentucky and from Minnesota south to Arkansas on Friday.

The National Weather Service said that for the first Christmas in 17 years, Nashville and Atlanta could get more than just a dusting of snow.

The storm was expected to intensify and move northeast on Sunday to the mid-Atlantic states and New England.

Delta Air Lines spokesman Morgan Durrant said 500 weather-related flight cancellations were planned for Saturday nationwide. That included 300 of the 800 scheduled departures from the Atlanta hub. Durrant said those affected had been notified.

Durrant recommended that passengers not travel on Christmas if they can help it.

The weather had not caused significant problems for the airlines Friday.

Both airlines encouraged passengers to monitor their websites, and both offered to waive ticket-change fees.

The weather service predicted a mixture of snow and rain overnight in parts of the Southeast, with the threat of ice-covered roads.

Karla Winfrey returned to Nashville from her current home in Atlanta to do some last minute running around Thursday for her mother who's cooking Christmas dinner.

"I wanted to make sure I was here before it started accumulating," said Winfrey, a multimedia journalist. "I've only missed one Christmas in my entire life from being home, so it was important for me to be here to get a taste of Tennessee for Christmas."

In the Atlanta suburb of Decatur, Vincenzo Tortorici said the prospect of snow evoked the memory of childhood Christmas visits to his relatives in Ohio.

"Snow was like frozen white icing on the cake of a magical time of my childhood," he said. "I'm glad the weather might cooperate to give my own son a white Christmas this year."

In Minnesota, the storm brought 6 inches of snow to Minneapolis and St. Paul. It pushed the monthly total there to 33.4 inches, topping the previous December record set in 1969.

The snow made traveling tough Friday in northeastern Iowa, where the bulk of the storm hovered.

Scott and Lori Whiting left Chicago for Colorado Springs, Colo., with their nine children Thursday evening. By morning, they had only reached Des Moines, a trip that normally takes about four hours, Lori Whiting said.

"The cars are really sliding around up there," Lori Whiting said. "It's kind of slushy. Some parts it's packed, and you don't think it's going to be slick and all of a sudden your car is fishtailing."

Scott Whiting got into a fender bender at a Des Moines truck stop. Still, the family was in good spirits and the children were singing carols.

Lori Whiting said they hoped to make it to Colorado Springs for Christmas Eve.

"Depending on the number of potty breaks, you understand," she said.

Many people traveled Thursday in hope of beating the foul weather.

Eric and Tatiana Chodkowski, of Boston, drove with their children, ages 2 and 4, to see relatives in New York. They deemed the roads congested but manageable Thursday, and most people found the nation's airports to be the same way.

Travelers could see airport screeners taking a closer look at empty insulated beverage containers like thermoses because air carriers were alerted about a potential terror tactic involving them, an administration official said.

The official, who spoke Thursday on condition of anonymity to discuss sensitive security matters, stressed that there is no intelligence about an active terror plot. The Homeland Security Department regularly alerts law enforcement about evolving terror tactics.

The Air Transport Association expects 44.3 million people on U.S. flights between Dec. 16 and Jan. 5 — up 3 percent over the same period a year ago but still below pre-recession travel volume. The average ticket price was $421, up by 5 percent.

The AAA predicted overall travel to rise about 3 percent this year, with more than 92 million people planning to go more than 50 miles sometime between now and Jan. 2. More than 90 percent said they would be driving.

In Kentucky, Transportation Cabinet spokeswoman Andrea Clifford said road crews would be salting and plowing parts of the state where snow falls Friday night. Crews had applied brine to 900 miles of roads in Louisville in advance of the snow.

Louisville last had snowfall on Christmas in 2002, when a half-inch fell.