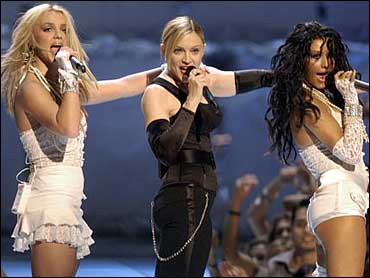 Parents, take heart: After years of popularity, the hot-to-trot look may not be so hot anymore.

The pendulum that gave us low-riding jeans and high-riding T-shirts may finally be swinging in the other direction. The Early Show correspondent Tracy Smith has the details in this week's Study Hall report.

Britney Spears, Christina Aguilera and Paris Hilton are the superstars who launched a troubling trend: the un-dressed dress code. When Britney bared her belly, Christina dropped her drawers, or Paris pushed down her waistline, so did teens all over the country.

One teen explains, "They start it and everyone sees, 'Oh, she's famous. She's popular. I want to be like her."

Another one adds, "I noticed a big change in trend when Britney Spears came out with 'I'm A Slave To You.' And she got down and dirty and it was just, everything became tacky after that.

But now, teens like Anna Miressi and her friends - Bettina Scherer, Courtney Lyons and Cassie Ottulich - say they're tired of the trashy look.

Courtney adds, "I'm not really comfortable with showing all that much of my body."

And Cassie points out, "I don't like skirts that when you bend over they can see your butt."

They even have a name for girls who wear flesh-baring fashions, and it's not exactly flattering: "Prostitots," the two teens exclaim in unison.

And they're not the only ones using that word. "I definitely have," says Amanda Freeman, a teen-trend expert. "It is a term that has come to characterize a style of dress that is on its last leg. We hope."

This latest trend could be labeled the "prostitot rebellion."

Freeman says, "There is a huge backlash amongst teenage girls who are saying, 'I don't want my stomach for everyone to see. I don't want to have to show cleavage and be so overt about my sexuality.' They want to be more private."

And girls like Amanda, Bettina, Courtney and Cassie are leading the charge.

Cassie says, "At this point in my life ,I feel l should be working towards, like, my future. Not trying to impress boys or something, because I'm just going to get in trouble."

Experts say this new, buttoned-up fad mis just beginning, so it may take a while before it hits Main Street, especially in the heat of the summer. But as more and more teens demand conservative clothing, stores will respond. And this fall, you may be seeing far less flesh.

Freeman says, "Even stores like Abercrombie & Fitch are changing their selection to have more coverage and be more conservative.

Bettina says, "A lot of girls are finally really, really, finding their own fashion sense and it's not skimpy."

The back-to-school look for these friends is going to be "conservative," they say.

Now, two things for parents to remember: One, this, too, is a trend, and you can bet, soon enough, it'll be over. And two, don't tell your daughter you like her new conservative look.